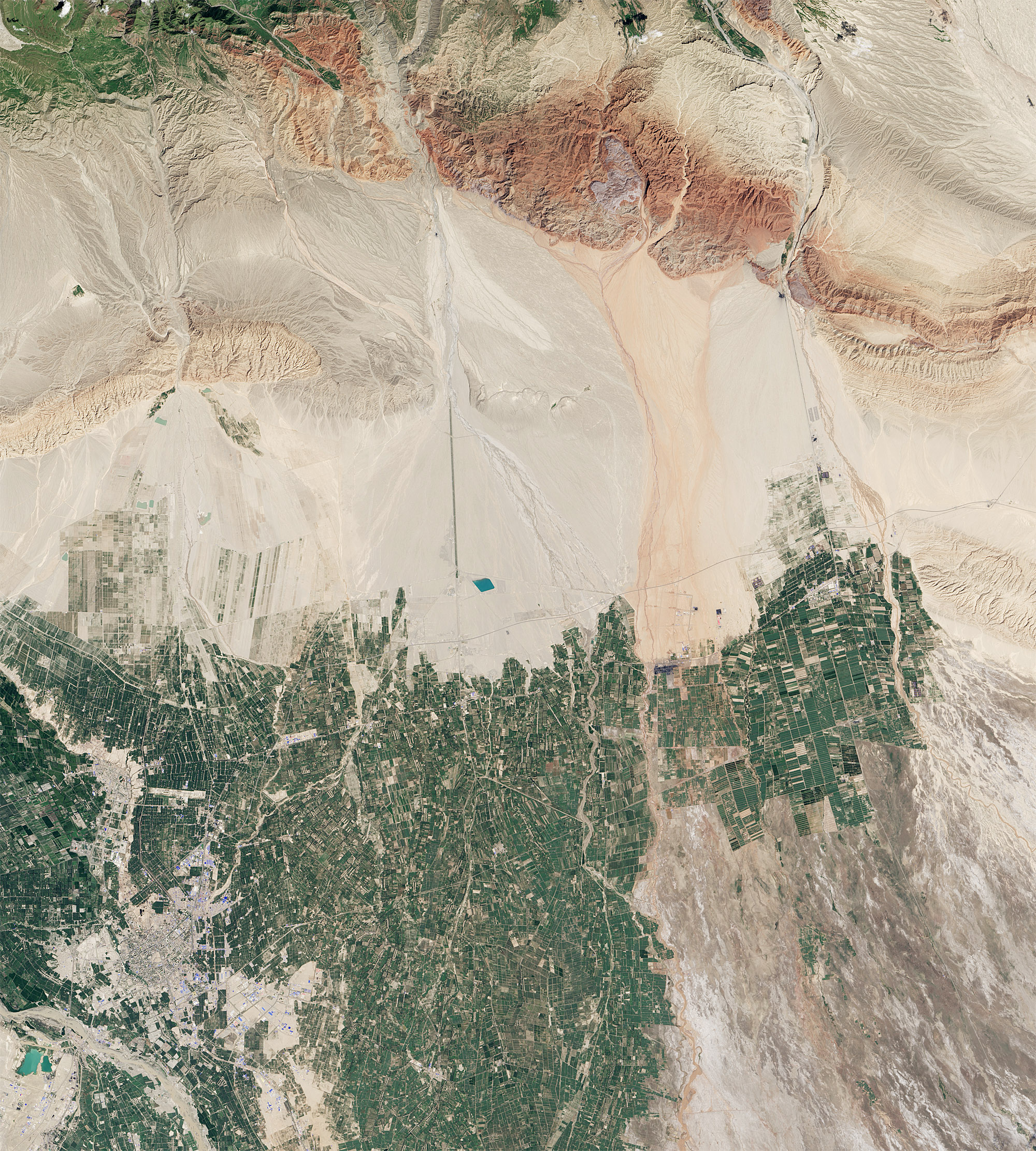 Layers of rock rich with salt and other evaporites are quite different than other types of sedimentary rock. Salt is weak—one of the weakest sedimentary rocks. It has low density, so it tends to be buoyant. And in many situations, salt behaves like a viscous fluid, oozing more like lava rather than fracturing like rock.

In the image above, the salt glaciers—also called salt fountains or namakiers—serve as an example of the peculiar geological formations that can arise because of salt’s unique properties. In this case, a layer of salt formed tens of millions of years ago when a large body of water dried up. Over time, other types of sediment buried the salt deposit, eventually forming layers of sandstone, silt, and mudstone that pressed down on the salt.

Because salt flows more readily and is less dense than other rocks, teardrop-shaped plugs of salt—diapirs—squeezed upward, pushing through layers of overlying rock until salt reached the surface and began spilling out into the basin as salt glaciers. An active tectonic environment eased the salt’s passage to the surface. Tectonic forces are pushing the Kuqa basin (in the Xinjiang province of western China) beneath the Tien Shan mountains as part of the ongoing collision between the Indian subcontinent and Asia. As a result, rock layers in the region are rife with faults that serve as conduits for rising plugs of salt.

On August 14, 2015, the Operational Land Imager (OLI) on Landsat 8 acquired this image of the salt glaciers in China. The white areas are salt deposits. The brightly colored rock formations surrounding the salt glaciers are mostly sandstone, mudstones, and siltstones. Many of these formations have red tones because they contain significant amounts of oxidized iron minerals.

“In wet areas with active salt tectonics, the salt rapidly dissolves as it reaches the surface,” explained Alexander Webb, a University of Leeds geologist who recently conducted field research in the Kuqa Basin. “But in an arid region like the Kuqa fold-thrust belt, the dissolution is slow enough that the salt can form flowing bodies like the salt glaciers seen here. Iran also has many salt glaciers similar to this.”

One of Webb’s graduate students, Cindy Colon, has analyzed Landsat imagery and interferometeric synthetic aperture radar (InSAR) observations to determine how much the salt surfaces are moving. Her preliminary findings suggest the salt glaciers are moving at a rate of about 5 millimeters (0.2 inches) per year.