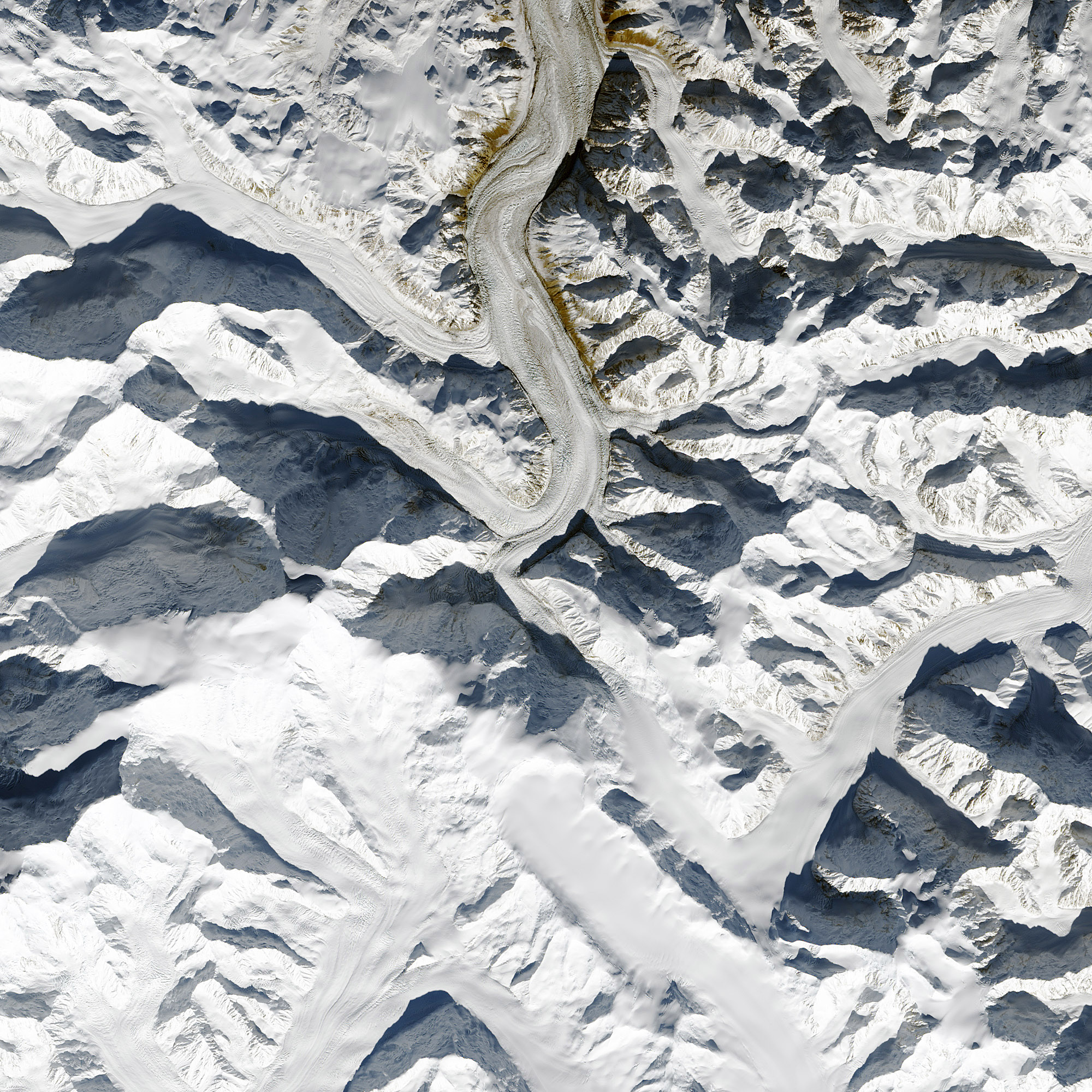 On October 11, 2015, roughly 45 megatons of rock and ice—equivalent to the weight of about 700 aircraft carriers—tumbled down the southeast flank of Mount Steele and slid across the surface of Steele Glacier. Mount Steele, the fifth highest mountain in Canada, stands amidst the Saint Elias mountains in an uninhabited part of southwestern Yukon Territory. Without a network of seismometers and satellites, the avalanche would likely have gone unnoticed in this remote region. Landslide Onto Steele Glacier

However, Colin Stark and Göran Ekström, scientists from Columbia University who monitor long-period seismic wave activity for evidence of landslides, were quick to detect the event. Stark and Ekström first became aware that a landslide may have occurred when a rapid detection software tool sifted through data from a global earthquake monitoring network and picked up a signal indicative of a fairly significant event on October 11. The earthquake sensors detect seismic waves—vibrations that radiate through Earth’s crust because of sudden movements of rock, ice, magma, or surface debris.

The seismic data suggested that a landslide had occurred in the vicinity of Mount Steele. However, seismic data could only provide an approximate location within a 500 square-kilometer area of the landslide. Visual confirmation came on October 13, 2015, when the Operational Land Imager (OLI) on Landsat 8 acquired an image (top) of the aftermath. The lower image shows the same area on October 4, 2015, before the avalanche. Brown debris from the landslide coats part of Steele SE—the sub peak of Mount Steele where the landslide began—as well as a portion of Steele Glacier. The dark areas are shadows. Turn on the image comparison tool to see the differences.

The fact that the debris fell on ice contributed to the long debris field. “‘Normal’ landslides move a horizontal distance that is fairly similar to the height drop, but landslides on top of glaciers often have an elongated runout since the ice surface has low friction,” explained Stark. In this case, the debris fell rapidly for about one kilometer (0.6 miles), and then slowed down as it hit the glacier surface and slid toward the northeast for about two kilometers. According to Stark and Ekström’s analysis, the maximum speed of the debris was about 30 meters per second. NASAs view.

There was no earthquake or other obvious trigger for the avalanche. “Very large landslides like this often have very ambiguous triggers,” said Stark. “Failure takes place because of a long-term accumulation of stress within the rock slope and a long-term weakening of the rock. A hair-trigger is often all that is needed.”

The October 2015 landslide is not the only one to affect this region recently. In 2007, an avalanche that began on Mount Steele dumped 105 megatons of debris on Steele Glacier. Though snow-covered now, the contours of that landslide’s debris pile are still visible a few kilometers to the northwest of the 2015 debris. In February 2014, about 68 megatons of debris slid from Mount La Perouse in southeastern Alaska.

Since 2013, Stark and Ekström have detected and identified ten landslides using a combination of seismic signals and satellite imagery that have been large enough to dump more than 15 megatons of debris. While the 2015 Mount Steele landslide was large for a rock avalanche, much larger events have occurred. Scientists have observed massive landslides in Kashmir and Tibet transporting as much as 440 megatons and 550 megatons of debris.