Salt is building up in the bottom of the Dead Sea • Earth.com

Salt is building up in the bottom of the Dead Sea 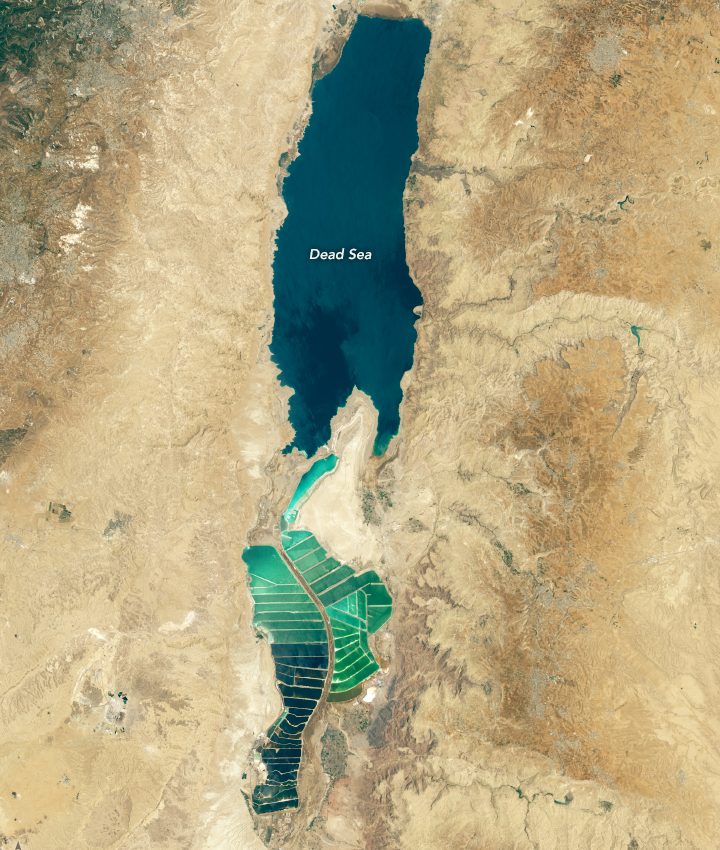 Salt is building up in the bottom of the Dead Sea Today’s Image of the Day from NASA Earth Observatory features the Dead Sea, which has a salt concentration that is nearly ten times the level found in any ocean. Therefore the concentration is a high volume.

Over the past two to three decades, water levels in the Dead Sea have dropped by about 1.2 meters per year. This makes the water even saltier across the surface.

Researchers have found that salt is raining down from the warm surface waters to the bottom of the lake, where it has been accumulating by about four additional inches each year.

This image was captured on July 21 2019 by the Operational Land Imager on the Landsat 8 satellite. The Dead Sea (Hebrew: יָם הַמֶּלַח Yam ha-Melah lit. Sea of Salt; Arabic: البحر الميت‎ Al-Bahr al-Mayyit or Buhayrat, Bahret or Birket Lut, lit. “Lake/Sea of Lot”) is a salt lake bordered by Jordan to the east and Israel and the West Bank to the west. It lies in the Jordan Rift Valley, and its main tributary is the Jordan River.

The Dead Sea has attracted visitors from around the Mediterranean Basin for thousands of years. It was one of the world’s first health resorts (for Herod the Great), and it has been the supplier of a wide variety of products, from asphalt for Egyptian mummification to potash for fertilisers.