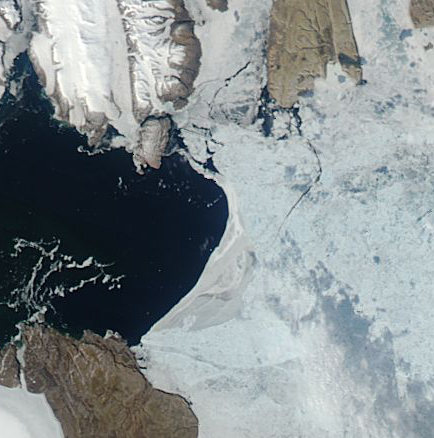 Sea ice in the Nares Strait —a body of water between Canada’s Ellesmere Island and Greenland—seen from the NASA P-3B on an IceBridge survey flight on Mar. 27, 2013. Credit: NASA / Christy Hansen.

In 1964, its name was agreed by the Danish (Stednavneudvalget, now Stednavnenævnet) and Canadian governments. The name derives from the British naval officer George Strong Nares.
The strait and neighbouring waters are usually hazardous for navigation and shipping. During August, however, it is usually navigable by icebreakers. Prior to 1948, only five vessels were recorded as having successfully navigated north of Kane Basin. In 2009 the ship Arctic Sunrise made the first known June transit into the Arctic Ocean.
Hans Island, a tiny island lying within the strait, is claimed by both Denmark (on behalf of Greenland) and Canada. Other islands within the strait are Joe Island, Cozier Island, and the much larger Franklin Island.
Thule People reached the Nares Strait in the early 13th century, where they hunted with and traded with Vikings. Archeological remains of Thule Culture and Viking presence are found on Ruin Island. Sea Ice in Nares Strait is a beautiful and surrounding the arctic waters. Three-quarters of Greenland is covered by the only permanent ice sheet outside Antarctica. With a population of about 56,480 (2013), it is the least densely populated territory in the world.  About a third of the population live in Nuuk, the capital and largest city. The Arctic Umiaq Line ferry acts as a lifeline for western Greenland, connecting the various cities and settlements.