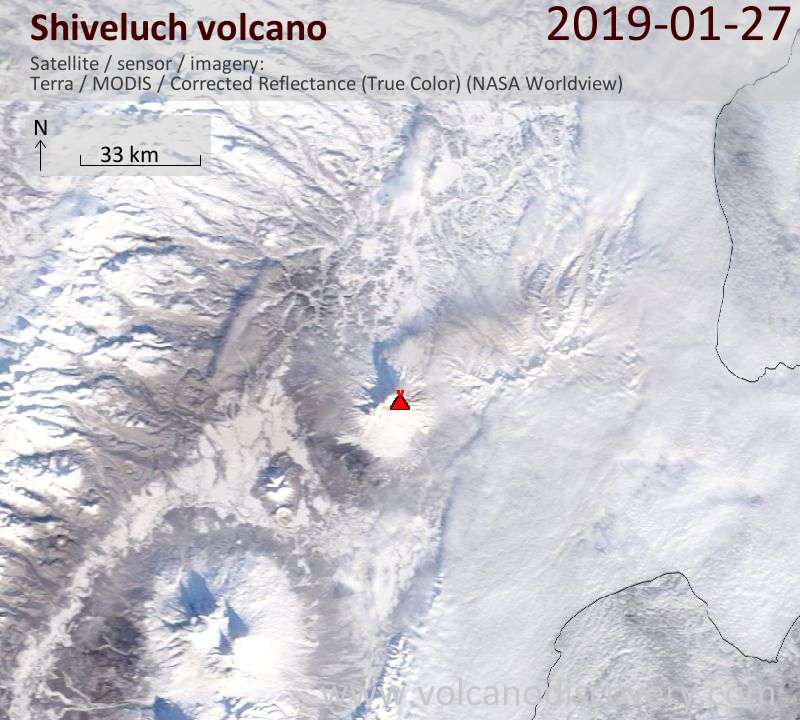 Shiveluch Volcano Erupts. A light tan plume of steam and possibly ash continues to rise away from the Sheveluch Volcano on Russia’s Kamchatka Peninsula. The volcano began its explosive eruption on May 9, 2004. By May 11, when this image was acquired by the Moderate Resolution Imaging Spectroradiometer (MODIS) on the Aqua satellite, the eruption had slowed to the plume seen here. The Kamchatkan Volcanic Eruptions Response Team observed a lava dome growing in the crater, and warns that another explosive eruption could occur at any time. The Sheveluch Volcano, top center, left a broad field of ash on the snow after its most recent eruptions.
The Kamchatkan Volcanic Eruptions Response Team also reported that the Karymsky Volcano has been intermittently active. In this image, a thin plume of ash appears to be rising from the volcano (lower left corner) and drifting southeast over the Pacific Ocean. As of May 11, both volcanoes remain at color code orange, the designation reserved for volcanoes that are erupting or may erupt at any time.
Both the image above and the full image are at MODIS’ maximum resolution of 250 meters per pixel. The image is available in additional resolutions.