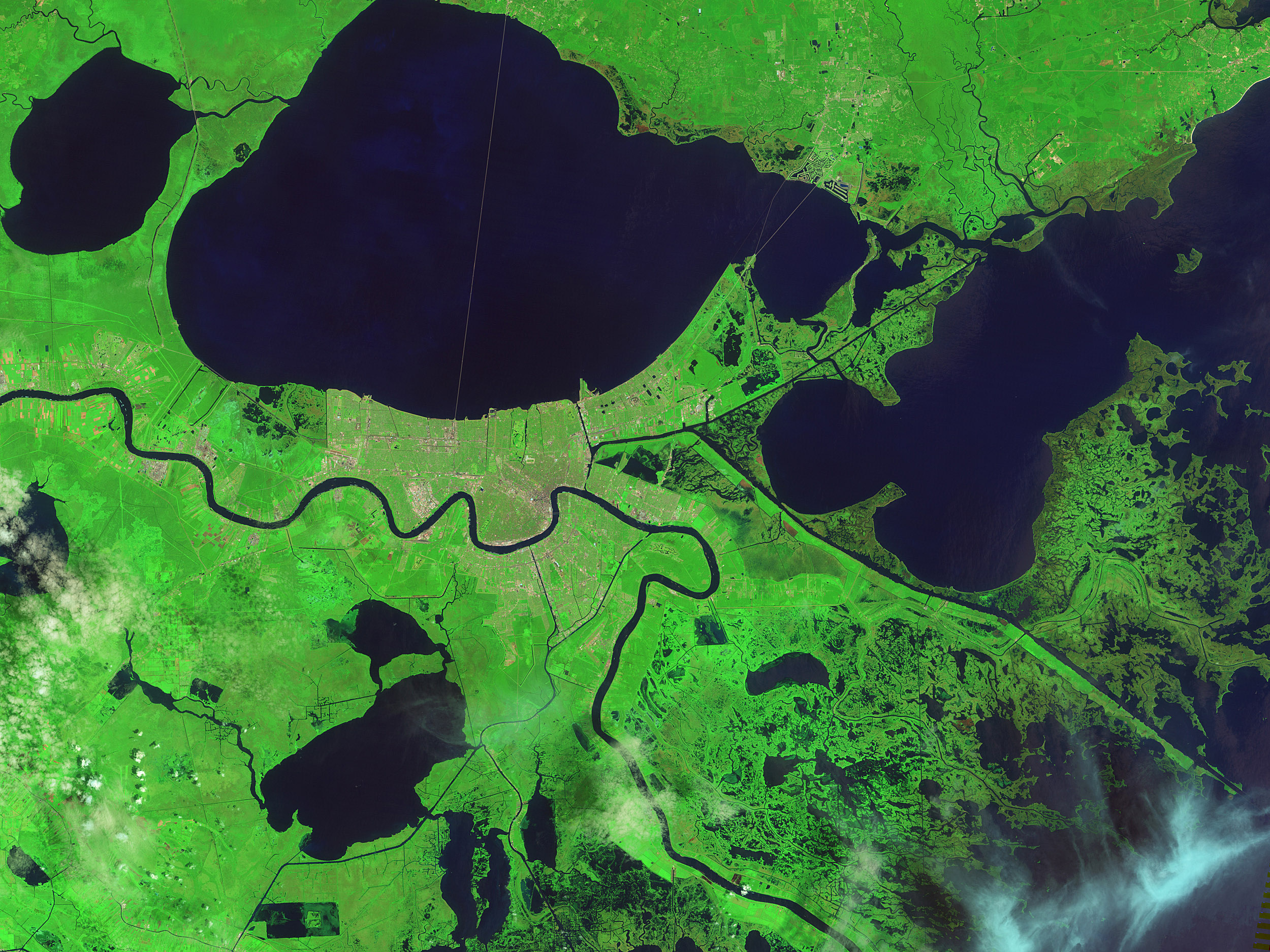 Ten years after making landfall, scars from Hurricane Katrina still linger in the New Orleans marshes. And not just in the blighted houses that mar some neighborhoods. The marshes and swamps that buffer New Orleans from the Gulf of Mexico still show evidence of Katrine’s wrath. Signs Of Katrina Still Linger In New Orleans Marshes.

The wetlands surrounding Delacroix, a fishing town to the southeast of New Orleans, were some of the hardest hit by the hurricane. Pounding surf, driving winds, and a potent storm surge transformed the marshes by picking apart mats of dead grass, stirring up and disbursing soft underlying sediments, scouring several new channels, and depositing leftover sediment and debris in new areas. NASA view

This pair of false-color images shows the transformation. The Thematic Mapper on Landsat 5 acquired the top image a week before the storm hit. The Operational Land Imager (OLI) on Landsat 8 acquired the second image in August 2015. With this band combination, normal vegetation appears bright green and flood-damaged vegetation is brown. Water is dark blue. (Note that you also can download a large image of the area as it appeared two months after the storm.)

Katrina delivered a massive surge of water that dramatically enlarged lakes, including Lake Lery and Petit Lake. It also scoured new channels and widened canals in ways that eliminated large amounts of marshland. As seen in the 2015 image, flood-damaged vegetation has returned to its normal color, but the enlarged waterways have persisted.

A team of U.S Geological Survey scientists has published detailed maps of land change around Delacroix. By looking at a series of Landsat and commercial satellite images of the area over time, and comparing them pixel by pixel, they have determined how much effect Hurricane Katrina had on the marshes compared to Gustav, another hurricane that struck in 2008.

Their conclusion was that Katrina’s extreme winds, long duration (20 hours), and major storm surge (up to five meters) did serious, lasting damage to Delacroix’s marshes; Gustav reinforced it in 2008. After Katrina’s flooding had subsided, 8.2 percent of the pixels in their study area had changed from land to water; Gustav changed an additional 1.4 percent of pixels.

Katrina did build new land in a few areas. In the 2015 image, for instance, note the expansion near Big Mar and along some of the other new ponds and channels west of Lake Lery. In total, 3.3 percent of pixels were converted from water before Katrina to land afterward.

Land losses tended to be more severe in freshwater and intermediate marshes closer to the town than in saltwater and brackish marshes closer the Gulf. Freshwater marshes have more pliable soil that is easily washed away. They also tend to support plants with shallower root systems than salt marshes.

“If Delacroix continues to dodge hurricanes, we can expect to see the extent of aquatic vegetation increase even if we don’t see the full reestablishment of healthy marsh in all the areas that had it before Katrina,” said Monica Palaseanu-Lovejoy, one of the U.S. Geological Survey scientists.