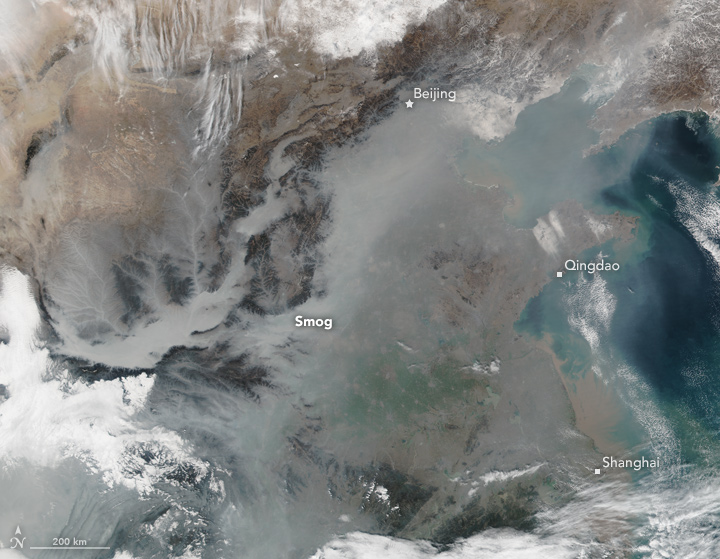 Today’s Image of the Day comes thanks to NASA’s Earth Observatory and shows a thick smog lingering in the air over China, thought to be caused in part by winter temperature inversions. The photo was taken by the Visible Infrared Imaging Radiometer Suite (VIIRS) on the Suomi NPP satellite.

While the bright white areas are likely clouds, the dense gray layer of smog that covers much of China’s lowlands and valleys is more common in the winter due to temperature inversions. Typically, the air is cooler the higher up in altitude you travel because the sun heats the air on the earth’s surface, which then rises until it expands and cools. But during temperature inversions, a warm layer of air sits atop cooler air, trapping pollutants from cars and fossil fuels.

Air pollutants are typically measured in microns, which equal one-millionth of a meter. According to the U.S. Environmental Protection Agency, any particle that has a diameter of 2.5 microns or less are considered most dangerous to human health because they can become lodged deeply within the lungs.

A 2016 study found that air pollution kills approximately 4,000 people in China each day, accounting for 1 in 6 premature deaths. Physicists at the University of California, Berkeley, calculated that about 1.6 million people in China die each year from heart, lung and stroke problems because of incredibly polluted air.

Air pollution is linked to asthma, chronic coughing, and a host of other respiratory problems especially in children, all of which are exacerbated by exercise. Scientists are concerned that the low air quality in China will force the nation’s children to stay indoors in order to avoid exposure to the pollution. Due to these risks, very few Chinese children participate in moderate or vigorous physical activity outside their schools. In fact, the number of overweight and obese children in the country has more than doubled in the last 25 years.

As we reported last year, creative solutions to China’s persistent air pollution problem have included this smog free tower that cleans the air.