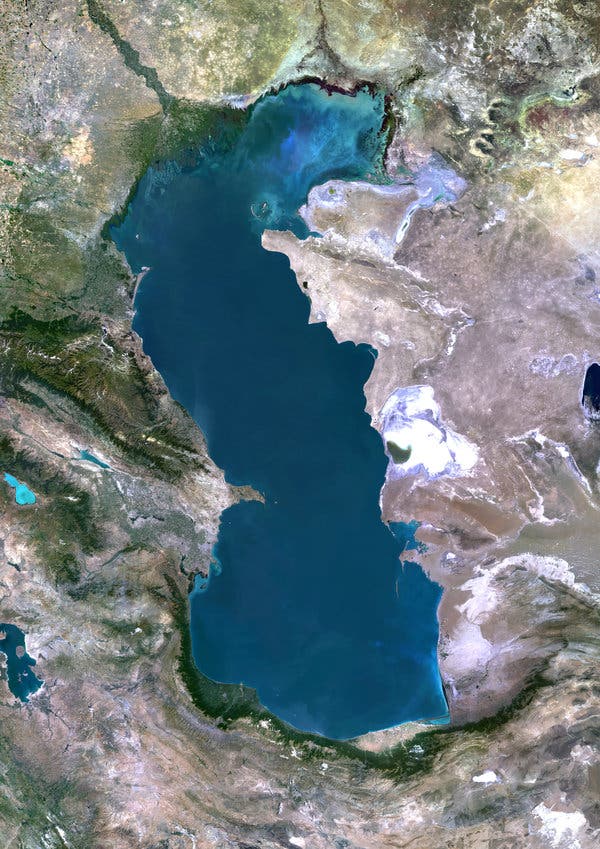 Sometimes referred to as the Caucasus Isthmus, the Caucasus-Caspian Region is a mixing-pot for scores of cultures. Due in part to its geographic isolation and having been in the path of numerous Eurasian migrations over the centuries, more languages are spoken here than in any similarly-sized region in the world. In this true-color Aqua MODIS image from September 30, 2004, the geographic diversity shown is as immense as the cultural counterpart.
In the upper left portion of the image, the southwestern-most portion of Russia spreads across the broad plains north of the Caucasus Mountains. Georgia runs along the southern face of the Caucasus Mountains and part of the southeastern shore of the Black Sea. In the small valley and plains south of Russia and on the central shore of the Caspian Sea, Azerbaijan sprawls until butting up against the mountains of Armenia and northern Iran. Another small piece of Azerbaijan is tucked away on the far side of Armenia. Stretching far from the southern shores of the Black Sea into the mountains and deserts of the Middle East is eastern Turkey, while in the bottom right corner, Syria and Iraq mark the northern edges of the Syrian Desert. The Reshteh-ye Kuhha-ye Alborz Mountains curve in a bright green arc around the southern end of the Caspian Sea in northwestern Iran, while on the far side of the Caspian Sea, Kazakhstan (upper right) and Turkmenistan (lower right) sprawl across the Urstyurt Plateau.
Three major lakes stand out like jewels against the mountains in the lower left portion of the image – Lake Van in eastern Turkey, Lake Sevana in Armenia, and the turquoise-hued Lake Urmia in northwestern Iran. Like the Caspian Sea, the bright colors are likely due to sediment in the waters. In its highest concentrations, sediment appears tan, but as it disperses, it starts appearing in shades of blue and green. Kara-Bogaz Bay, on the Caspian Sea’s eastern side, is a good example of this. The Bay is quite shallow, so any movement in the water stirs up sediments from the bay floor and turns it to milky shades of blue and green.