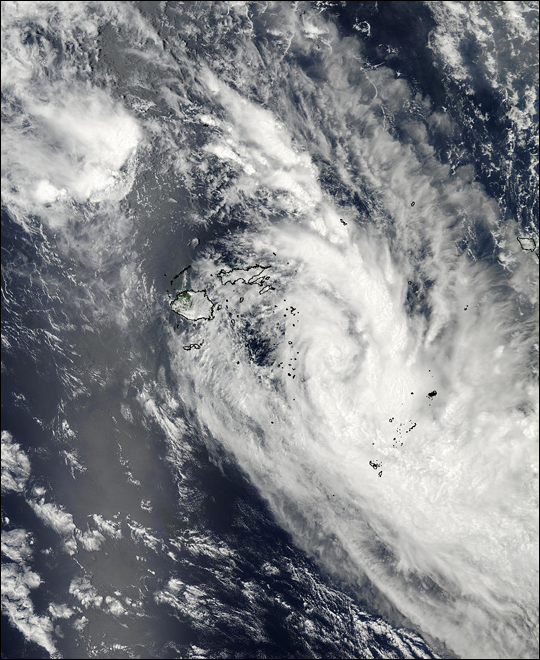 This true-color image from the MODIS instrument on NASA’s Aqua spacecraft shows Tropical Cyclone Cilla located approximately 333 miles east of Suva, Fiji. Maximum sustained winds are near 40 mph and Cilla is expected to slowly transition to an extratropical system as it moves to the south.

Visit the MODIS Rapid Response Team, for a copy of this scene at MODIS’ full resolution of 250 meters per pixel.

Tropical Cyclone Cilla (RSMC Nadi designation: 10F, JTWC designation: 13P) was a tropical cyclone that brought minor damage to several islands in the South Pacific in January 2003. The fifth cyclone of the 2002–03 South Pacific cyclone season, Cyclone Cilla developed from a monsoon trough on January 26 northwest of Fiji. Initially, Cilla moved east, and due to decreased wind shear, Cilla was able to intensify.

On January 28, Cilla reached its peak intensity of 75 km/h (45 mph). After slightly weakening, Cilla briefly re-intensified the next day. However, Cilla transitioned into an extratropical cyclone on January 30. Along its path, Cilla dropped heavy rainfall over islands it passed. During its formative stages, the low dropped heavy rain over Fiji, which had already been affected by Cyclone Ami two weeks prior. Damage in Tonga was mostly limited to vegetation and fruit trees; infrastructural damage was also relatively minor. Cilla also brought moderate rain to American Samoa.