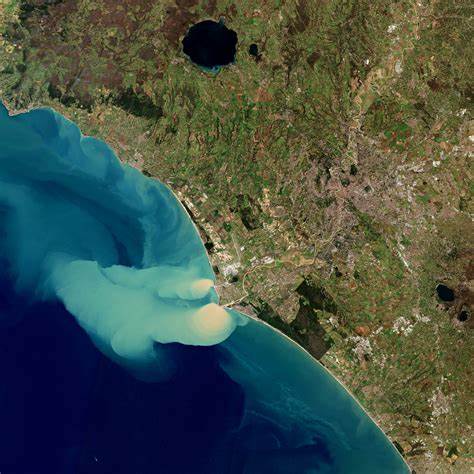 Turbid Waters off Florida. Through a fringe of turquoise typically hugs the western shores of Florida, bright water extends out into the Gulf of Mexico in this Moderate Resolution Imaging Spectroradiometer (MODIS) image, acquired by NASA’s Aquasatellite on December 20, 2003. The coloring is probably a result of winter weather. Strong winds blowing across the surface of the water can stir the waters, bringing sediment to the surface.

The dirt in the water reflects light back to the satellite, giving the waters the brilliant blue-green tint seen here. In the lower right corner of the image, a halo of blue circles the Bahamas Islands. In this case, the color is caused by coral reefs, which also reflect light through the ocean water. In contrast to the water colored by sediment, the blue defined by the reefs has a sharp boundary where the ocean drops off and the reef ends. The Bahamas were inhabited by the Lucayans, a branch of the Arawakan-speaking Taíno people, for many centuries.  Columbus was the first European to see the islands, making his first landfall in the ‘New World’ in 1492. Later, the Spanish shipped the native Lucayans to slavery on Hispaniola, after which The Bahama islands were mostly deserted from 1513 until 1648, when English colonists from Bermuda settled on the island of Eleuthera.