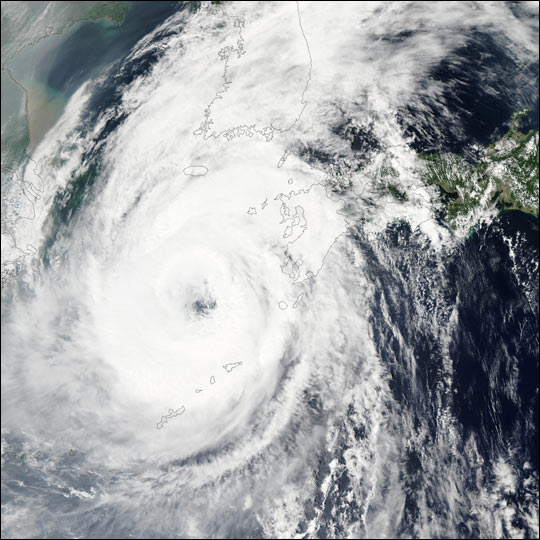 During the final days of August 2002.  Typhoon Rusa swept past the Japanese island of Kyushu and clobbered South Korea. Therefore killing more than 110 people and submerging thousands of homes. The typhoon can be seen just south of the Korean Peninsula in this true color image taken on August 30, 2002. Pic by the Moderate Resolution Imaging Spectroradiometer (MODIS), flying aboard NASA?s Aqua spacecraft.

Packing winds of up to 120 miles (200 kilometers) per hour, Rusa was the most powerful hurricane to strike the Korean Peninsula since Typhoon Sarah in 1959. Up to 36 inches of rain were dumped on some parts of South Korea over a two-day period. The resulting floods left 113 dead and another 71 missing. The storm destroyed hundreds of acres of farmland, tore apart bridges, ripped up sections of railway, and cut off fresh water to 400,000 people. Altogether, officials estimate that the damage caused by the hurricane could be as much as $750 million. After hitting South Korea, the storm moved north to Sakhalin Island in Russia?s Far East where it brought torrential rains that destroyed houses and flooded streets.