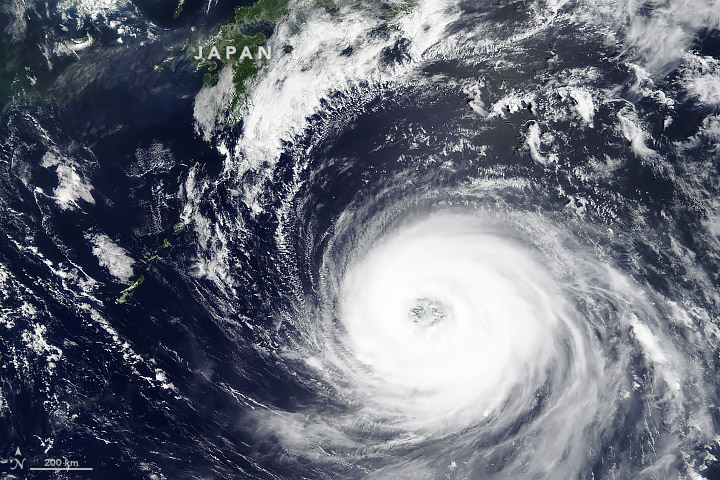 The powerful storm had maximum sustained winds of 115 miles per hour, and was expected to move over the Amami Islands before heading north toward the Korean Peninsula.

Japan may endure a second storm later this week, as Typhoon Cimaron intensifies in the Northwest Pacific.

This image was captured by the Moderate Resolution Imaging Spectroradiometer (MODIS) on NASA’s Terra satellite on August 20, 2018. Typhoon Soulik heads toward Japan shown in image above.

Japan (Japanese:, Nippon  (listen) or Nihon  (listen)) is an island country located in East Asia. It is bordered by the Sea of Japan to the west and the Pacific Ocean to the east, and spans more than 3,000 kilometers (1,900 mi) along the coast of the continent from the Sea of Okhotsk in the north to the East China Sea and Philippine Sea in the south. Part of the Pacific Ring of Fire, Japan encompasses a stratovolcanic archipelago of about 6,852 islands, with five main islands (Hokkaido, Honshu, Kyushu, Shikoku, and Okinawa) comprising 97% of the country’s total area of 377,975 square kilometers (145,937 sq mi).