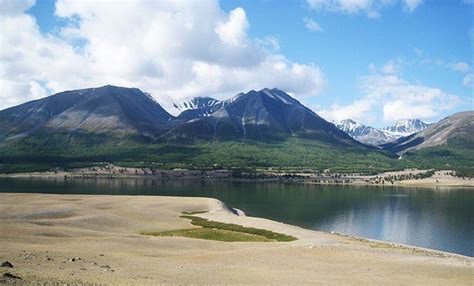 The Uvs Nuur Basin, Mongolia  sits on the northern edge of the Central Asian steppes, bounded on all sides by mountains. Though largely arid, the basin is dotted with water. A large salt lake, the Uvs Nuur Lake, sits at the center of the basin, and several smaller lakes are scattered across the region. Rivers, the largest of which is the Tes-Khem, run from the surrounding mountains into the basin, but no rivers flow out of the basin. This image shows one of the smaller lakes near the western edge of the basin.

Since little rain falls in the basin, the most vibrant green in this image comes from the wetlands that surround rivers flowing into the small lake. A web of bright green lines the river that flows in from the west, culminating at a broad green delta. Other wetlands cluster around rivers on the northeast and southern sides of the lake. Possibly the most striking feature of this image, the wetlands are an important wildlife habitat. Streaks of white running across the desert are likely seasonal streams that flow when snow melts off the mountains in the spring.

Far from a moderating ocean, the Uvs Nuur Basin has an extreme climate with temperatures that swing from a low of -72 degrees Fahrenheit during the winter up to 104 degrees in the summer