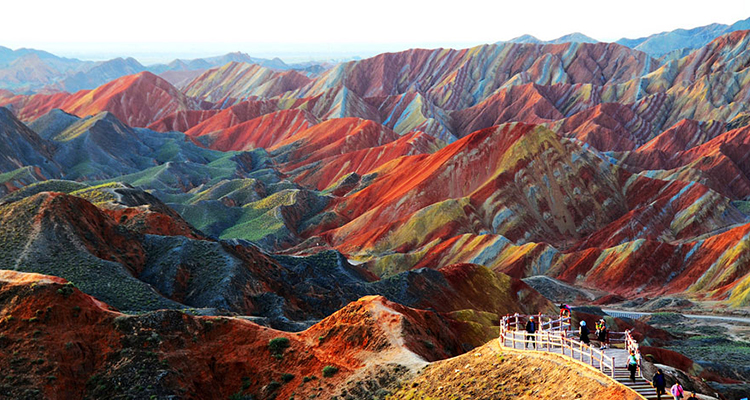 The Zhangye National Geopark (simplified Chinese: 张掖国家地质公园; traditional Chinese: 張掖國家地質公園; pinyin: Zhāngyè Guójiā Dìzhìgōngyuán) is located in Sunan and Linze counties within the prefecture-level city of Zhangye, in Gansu, China. It covers an area of 322 square kilometres (124 sq mi). The site became a quasi-national geopark on April 23, 2012 (provisional name: Zhangye Danxia Geopark). It was formally designated as “Zhangye National Geopark” by the Ministry of Land and Resources on June 16, 2016 after it has passed the on-site acceptance test. Known for its colorful rock formations, it has been voted by Chinese media outlets as one of the most beautiful landforms in China.

The park is located in the northern foothills of the Qilian Mountains, in the counties of Linze and Sunan, which are under the administration of the prefecture-level city of Zhangye, Gansu province. The main areas of Danxia landform are in Kangle and Baiyin townships.NASA view

The core area of the park, Linze Danxia Scenic Area, is located 30 kilometres (19 mi) west of downtown Zhangye and 20 kilometres (12 mi) south of the seat of Linze County. It is the most developed and most visited part of the park. A second scenic area, Binggou (冰沟), located on the north bank of Liyuan River (梨园河), was officially inaugurated on 3 August 2014.  Binggou covers an area of 300 square kilometres (120 sq mi), and its elevation ranges from 1,500 to 2,500 meters above sea level. A third area, Sunan Danxia Scenic Area, is located in Ganjun, south of