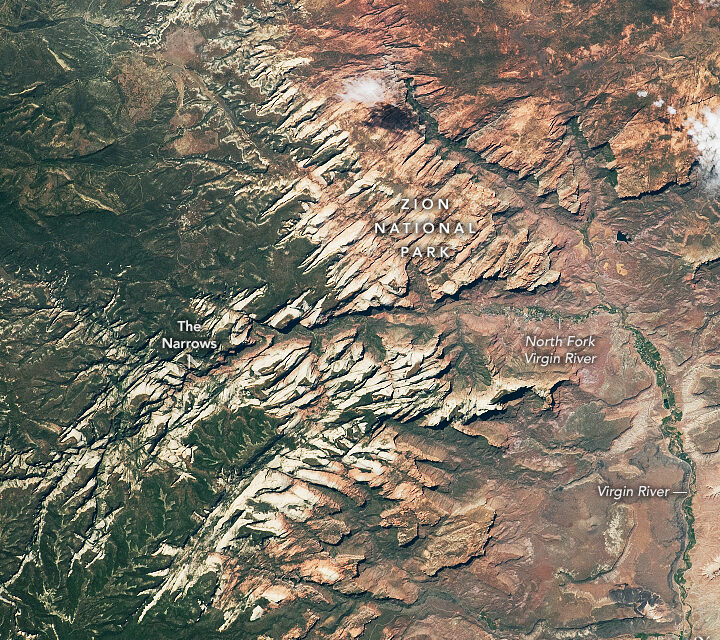 Today’s Image of the Day from NASA Earth Observatory features Zion National Park in southwestern Utah. The photograph was captured on June 30, 2022 by an astronaut onboard the International Space Station (ISS).

“Note the predominantly south-up orientation of the image,” says NASA. “While opposite of many maps, the rotated image depicts the terrain more clearly by minimizing an optical illusion known as relief inversion.”

More than four million people visit Zion National Park each year. The region is known for its sharp peaks and deep canyons.

The park is home to more than 1,000 plant species, a number of endangered animals, and tens of thousands of acres of protected wilderness.

“Zion provides a sanctuary to endangered animals, such as the California condor, Mexican spotted owl, and the Southwestern willow flycatcher,” notes NASA.

There are also archeological sites throughout Zion National Park.

“Zion shares geologic history with the Grand Canyon. Both sites include the Kaibab Formation, which is a limestone and siltstone deposit formed in an ancient inland sea,” says NASA.

“The significantly younger Navajo Sandstone exposed at Zion forms most of the prominent cliffs throughout the park. Evidence of human life in the Zion National Park area dates to the Ancestral Puebloan people, who inhabited the region between 2,000 and 8,000 years ago.”

“Deep, narrow slot canyons branch off the North Fork of the Virgin River. Zion is prone to flash floods during monsoon season, between July and September, posing a threat to hikers in the slot canyons.”

In he summer heat, cyanobacteria blooms in the rivers of Zion pose an additional threat to hikers and wildlife, according to NASA.