A COVID-19 outbreak could be devastating for mountain gorillas • Earth.com 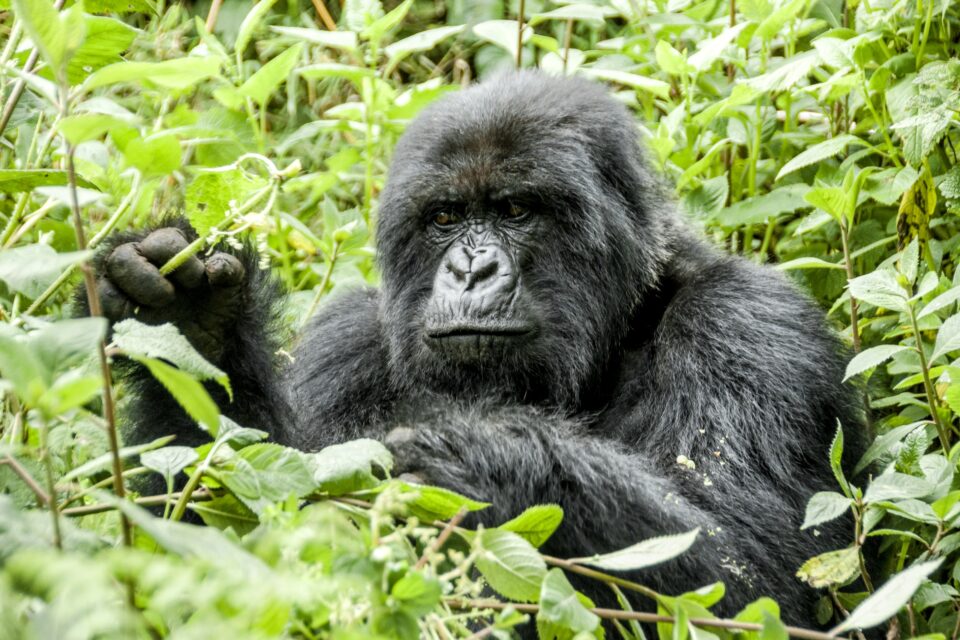 A COVID-19 outbreak could be devastating for mountain gorillas

A new study highlights the dangers of the ongoing COVID-19 pandemic for mountain gorillas, particularly those in Volcanoes National Park. The researchers determined that there is a very high probability that a COVID-19 outbreak would lead this population of wild mountain gorillas to collapse.

“Mountain gorillas (Gorilla beringei beringei), classified as endangered by the International Union for the Conservation of Nature (IUCN) Red List, have been the focus of intense study on the potential effects of diseases, particularly given that a significant percentage of the population is habituated and in close contact with humans on a daily basis for ecotourism, protection and research programs,” wrote the study authors.

“Respiratory outbreaks occur on almost an annual basis – between 1990 and 2020, 18 outbreaks were recorded in the groups within Volcanoes National Park – and pneumonia is considered the second highest cause of mortality, although in only a few cases have illness be directly linked to human origins due to limited molecular data.”

Even though COVID infections have been found in captive western lowland gorillas, the potential health risk that COVID-19 poses to mountain gorillas and other wild apes is not yet clear.

“The current COVID-19 pandemic has created unmeasurable damages to society at a global level, from the irreplaceable loss of life, to the massive economic losses. In addition, the disease threatens further biodiversity loss,” wrote the researchers.

“Due to their shared physiology with humans, primates, and particularly great apes, are susceptible to the disease. However, it is still uncertain how their populations would respond in case of infection.”

To investigate, a research team led by Fernando Colchero from the University of Southern Denmark obtained data on 396 gorillas from the Dian Fossey Gorilla Fund. The information was collected between 1967 and 2018 in Volcanoes National Park.

Taking into consideration the yearly variations in the size of the gorilla group, the experts used computer models to simulate the probability that a COVID-19 outbreak would lead to a population collapse.

Overall, the study authors ran 2,000 simulations in which the size and structure of the population in the park varied at different rates. The analysis revealed that 71 percent of these simulated populations would collapse within 50 years.

According to the researchers, the outlook could be even more grim due to the fact that mortality could be higher among gorillas with a limited availability of treatment options.

On the other hand, the experts noted that the tendency of gorilla groups to naturally socially distance from each other likely decreases the risk of SARS-CoV-2 transmission.

“The most evident and urgent goal is to avoid infection with COVID-19,” wrote the researchers. “This requires that both, park personnel and tourists are vaccinated promptly, monitored for evidence of infection before they come in proximity of the mountain gorillas, and that mask wearing, hygiene measures and daily health checks before visiting gorillas are strictly followed.”

“Similarly, it is fundamental to establish a monitoring protocol that allows testing regularly gorillas for possible infections.”