Algae blooms can release neurotoxins into the air • Earth.com 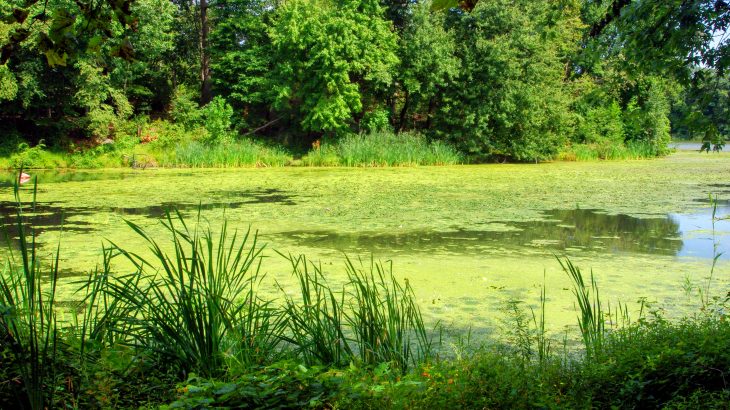 Algae blooms can release neurotoxins into the air

A dangerous type of toxin is being emitted from pond scum, according to a study published by Taylor and Francis. For the first time, scientists have detected the presence of anatoxin-a (ATX) in the atmosphere near a pond in Massachusetts with large algae blooms.

Anatoxin-a, also known as “Very Fast Death Factor,” is a neurotoxin produced naturally by cyanobacteria in water bodies worldwide. ATX can cause a range of symptoms including loss of coordination, muscular twitching, and respiratory paralysis. The toxin can be fatal to dogs, livestock, and other animals who drink contaminated water.

Harmful algal blooms emerge when large amounts of cyanobacteria grow on the surface of a pond or lake, and these blooms are amplified by fertilizer runoff from wastewater or nearby farm fields. Cyanobacteria, which are also called blue-green algae, are a type of bacteria that can photosynthesize.

Algae blooms can further degrade water quality by depleting it of oxygen. When the algae eventually die, they sink to the bottom of the water and decompose. This process can consume all of the oxygen, killing fish and other animals. In addition, the toxins released from the algae blooms can prove fatal for marine life.

“ATX is one of the more dangerous cyanotoxins produced by harmful algal blooms, which are becoming more predominant in lakes and ponds worldwide due to global warming and climate change,” said study lead author Dr. James Sutherland.

The researchers speculated that ATX may become airborne under certain environmental conditions, even though it had never been detected in the atmosphere before.

To investigate, the team collected samples of airborne particles from around the edge of Capaum Pond on Nantucket Island from July to October, when it was regularly covered with algae blooms.

An analytical technique called liquid chromatography-tandem mass spectrometry was used to search for ATX in the samples, as well as in samples of water from the pond.

According to the researchers, the neurotoxin was likely blown from the surface of the water by strong wind the previous night. Then, ATX could have persisted in the foggy conditions that were present the day that it was detected.

The airborne source of ATX is not yet clear. The toxins could be released into the air within small water droplets, attached to aerosol particles, or even inside cyanobacteria blown into the air. The potential impacts on humans and wildlife are also unknown, but the possibility of exposure is cause for concern and further investigation.

“People often recreate around these lakes and ponds with algal blooms without any awareness of the potential problems,” said Dr. Sutherland. “Direct contact or inhalation of these cyanotoxins can present health risks for individuals, and we have reported a potential human health exposure not previously examined.”

The study is published in the journal Lake and Reservoir Management.