Alligator wrestling in Florida may soon become a thing of the past • Earth.com 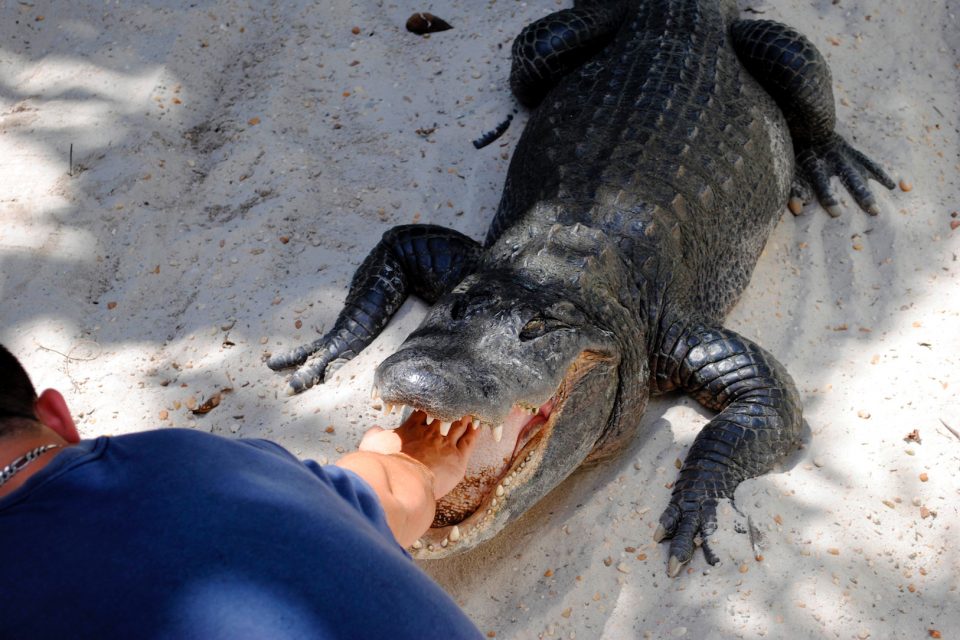 Social media has been having fun with trend of ‘Florida Man…’ stories, which are less about any one person and are more of a narrative element.  “Florida man…” typically refers to a true news story about a man in Florida that seems to embody the same bizarre elements. It’s somewhat of a harsh Florida stereotype, but there certainly are plenty of real life examples.

A perfect example of a Florida Man story is the case of Joshua James who was charged with assault with a deadly weapon without intent to kill in 2016 after he threw a live alligator through the drive up window of a Wendy’s, according to The Guardian.  Many of the Florida Man stories involve alligators, actually.  It seems that one of America’s largest and most dangerous reptiles imprinted a unique history in Florida.

Human interactions with the American Alligator (Alligator mississippiensis) of course date back before Europeans ever arrived in the Americas.  According to Native-languages.org, for many Native American groups, the alligator figured into mythology as something of an inept villain, easily outsmarted.  Other times, the alligator is viewed in a more favorable light.

In a Choctaw myth, a man is very unlucky in hunting.  In desperation, the man goes into the swamp, determined to not leave until he’s killed a deer or died himself.  After days without success, the man finds an alligator lying in a dry patch of sand that is a pool in the rainy season.  The man and alligator make an agreement that if the man carries the alligator to water, the alligator will tell him how to become a great hunter.  The alligator and man are both true to their word and the alligator in essence tells the man to limit his hunting, passing by younger deer and fawns and only hunting the older males and he will become the greatest hunter.  Such myths give a small insight into the pre-Columbian relationship of humans and alligators. But much of the recent history dealing with alligators is affected by European Americans.

The history of alligator wrestling is entwined with the history of oppression of Native Americans in the Deep South.  The Seminole tribe of Florida refer to themselves as the ‘unconquered people’ because they are descendants of Native Americans that eluded capture by the US army.  The marshy, treacherous land of the Everglades gave the Creeks from Georgia and Alabama refuge from military forces. Eventually the Creek were joined by other tribes including the Yuchis, Yamasses, a few remnant people native to the Everglades, and runaway slaves.  From this melting pot of people came a new tribe called the Seminole. A series of conflicts with the US left the remaining Seminole hiding deeper in the Florida swamps with no contact with the US until trading posts opened up.

The Seminole traded skins, including those of alligators, as well as crafts and other trade good with US settlers.  By 1880, as many as 50,000 alligator hides were shipped from Florida yearly. Some believe that catching alligators for their skins and for food is the origin of alligator wrestling.  According to the Florida Department of State, the Seminole have long worked hard to maintain independence, including financial independence.  Today, citrus farming and livestock have replaced trade in skins and crafts as the main revenue for the Seminole but tourism also plays a role, including alligator wrestling.

Vice reports that as far back as 1890, tourists to Florida were willing to pay a few cents to see captive alligators.  Hosts of roadside attractions were once the reality, tiny semi-professional shows sometimes featuring captive wildlife were common.  Disney World, Sea World, and Epcot Center worked together to push the small attractions out of the way. Fortunes changed in the Seminole Tribe as well.

The L.A. Times reported in September of 2000 on the changes coming to alligator wrestling.  It was in 2000 that for the first time, the Seminole Tribe relied on newspaper ads to fill an alligator wrestling position.  Most of the applicants weren’t Seminoles. The work is risky. Kenny Cypress, then in his late 20s, was performing at the Miccosukee Tribe’s cultural center when an alligator bit down on his head.  Cypress survived with the help of men that pulled the alligator off him, but he was injured. Seminole Chief James Billie lost a ring finger while wrestling an alligator. People have been known to lose limbs, despite experienced wrestlers claiming it can be done safely.  Fewer Seminoles are interested in such dangerous work, which starts at $8 per hour.

Through Casinos, Bingo halls, The Hard Rock Café and other enterprises, Forbes estimates that the tribes net worth was $12 Billion in 2016.  That means that every member of the small Seminole tribe receives about $128,000 a year, an amount that only accumulates in a trust for those under 18 years old.  With numbers like these, it’s easy to see why outsiders are being increasingly hired for the low paying and dangerous job of alligator wrestling.

If people stop wrestling alligators, the animals remain, roaming the swamps and dwelling in history and myth.