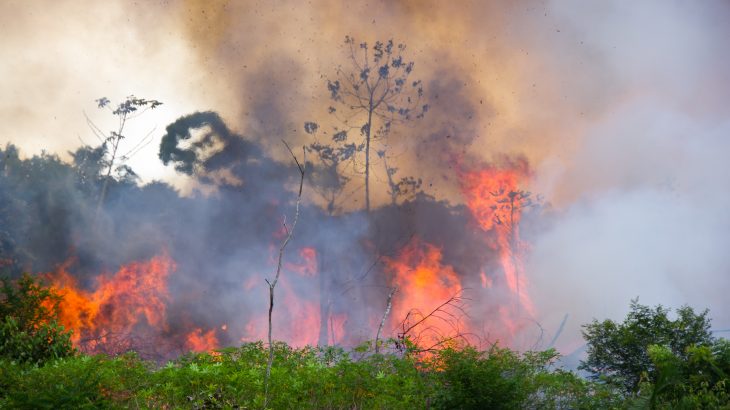 Selling Amazon destruction: Companies and politicians profit as forest burns. On a day to day basis, most of us are probably more familiar with Amazon.com than the Amazon rainforest. Any sort of jungle may seem exotic and far removed from the US. Yet all of us are very much connected to the world’s rainforests.

We drink water and breathe air daily that might’ve cycled through the rainforest at some point. When we eat bananas, chocolate or vanilla, we are eating products that are often grown near rainforests. Coffee is sometimes grown in the shade of what remains of a rainforest canopy. Cattle are raised for beef where once there was tropical forest, and more trees are cleared to grow soy to feed even more livestock.

Hardwoods that you can buy in a store in the US sometimes come from trees cut in the jungle. We watch documentaries and visit zoos to catch a glimpse of what life in the tropical forests must be like. In all these ways and more, we are connected to tropical rainforests throughout the world, including the world’s largest: the Amazon.

There’s a distinctly dark side to some of the dealings America has involving rainforests. Since the source of many products are not clearly visible, consumers often contribute to destruction and exploitation without being aware. Large parts of the Amazon have been burning this year and it’s common knowledge that people and profit are largely to blame. What’s less widely accepted is the role Americans play in the destruction of the Amazon.

The fires in Brazil have mainly been started to clear land for cattle, for crops, for exports and profit. Brazil is the world’s top beef exporter, supplying almost 20% of the global supply. Brazil is also a major global supplier of soybeans, and the US-China trade war is only encouraging the country to grow more soy. The United States has close ties to soy and beef in Brazil, the United States government is also becoming increasingly friendly with that of Brazil.

Jair Bolsonaro, the president of Brazil, has sometimes been nicknamed ‘tropical Trump’ due to the similarity between the two leaders. Bolsonaro certainly shares Trump’s tendency to see environmental regulation as merely an obstacle to maximizing profits. Since the rise of Bolsonaro, the government of Brazil has reached out to Washington DC.

The Intercept reports that in June, the governor of the state of Amazonas, Wilson Lima, began working with Interamerica Group, a DC based lobbying firm founded by New Jersey native and Brazilian national Jerry Pierce Jr. Lima is part of a Conservative party associated with the Assembly of God, a conservative Pentecostal church. Wilson Lima, whose state contains roughly a third of the Amazon rainforest, made Jerry Pierce her government’s representative in meetings with US federal officials. Jerry Pierce has previously worked for George H. W. Bush and has been an open supporter of both Donald Trump and Jair Bolsonaro.

Interamerica Group has already created an information packet promoting US businesses in Amazonas. The packet promotes Amazonas as a great place for agribusinesses, mining, and chemical companies. Several other US companies are already heavily invested in the region and profiting as the forest burns. Amazon Watch, a non-profit that works with indigenous communities to protect the Amazon, published a report on those who profit from the destruction of the Amazon.

Among these, Bunge and Cargill were fined most heavily by IBAMA. Bunge and Cargill are part of the “ABCD group” consisting of Archer Daniels Midland (ADM), Bunge, Cargill, and Louis Dreyfus, which dominate Brazil’s global grain trade. The ABCD group is heavily financed by US and EU companies.

The Amazon Watch report listed 13 US and EU financial institutions in particular that provide over US $1 Billion in credit to ABCD commodity traders. The companies include well known banks such as JP Morgan Chase, Barclays BLC, Bank of America, Citi Group, Deutsche Bank, HSBC and Wells Fargo.

Other US companies directly invested into the ABCD group with Vanguard, State Farm, BlackRock, State Street and T. Rowe Price being top US and EU investors. These are all companies financing the destruction of the Amazon and Bolsonaro’s policies through funding soy agribusiness in Brazil.

Beef is another leading cause of Amazon destruction. The EU imported 41% of it’s beef from Brazil in 2018 and is the second largest trade partner after China with Brazil accounting for 18.3% of its trade. US and EU businesses heavily finance the cattle industry in Brazil and have the power to influence it as well. Some of the same financial institutions that finance soy in Brazil also finance the beef industry. HSBC, JP Morgan, Chase, and Bank of America all supply credit to major Brazilian beef exporters. Capital Group, BlackRock, Fidelity, Vanguard and Dimensional Fund Advisors are the top five US and EU shareholders in Brazilian beef exporters.

Brazil is dependent on international trade as is any major world economy, especially dependent on China, the EU and the US. Brazil is also dependent on consumers of beef and soy products. Together, beef and soy agriculture in Brazil accounts for 80% of Amazon deforestation. These industries also prop up Bolsonaro who has called himself ‘Captain Chainsaw’ in his lust for the destruction of the Amazon Rainforest.