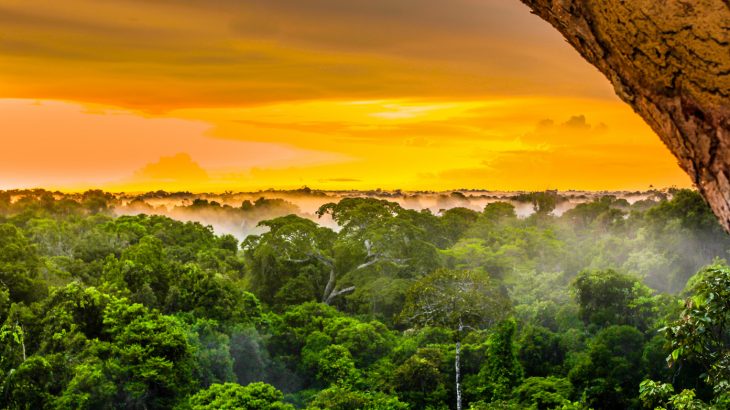 A massive part of the Amazon faces new deforestation threats

Until recently, the government of Brazil had allowed settlers into parts of the Amazon region only with an agreement that 80% of their land will remain undeveloped under the Brazil’s Forest Act.  The law was revised in Brazil in 2012, allowing 50% of the land to be developed if the state government protects 65% of its public land. Mongabay reports that a new study released in Nature Sustainability shows that the change in regulation opens up an enormous amount of land.  All together a piece roughly the size of Ireland, could now be up for development in the Amazon.

6.5 to 15.4 million hectares of private land previously required to be protected is now threatened with deforestation.  Most of the forest threatened by this change in policy is also primary forest, that is forest that is already least disturbed.  This amounts to 1.2% to 2.8% of the whole Amazon rainforest, perhaps the greatest tropical rainforest left on Earth and certainly the largest.  Brazil could be at a turning point in regards to their wild lands, the Amazon in particular. The change was recently upheld by a court decision in Brazil’s highest court.

The change also extends amnesty to illegal forest operations prior to 2008 WWF reports.  Some of the areas now open to legal deforestation were previously declared to steep for development.  The deforestation of especially hilly or steep areas is especially problematic because it can speed erosion not only destroying land but also polluting water sources with severe runoff.  BBC reports that although amnesty is extended, in theory larger land owners might still be required to replant some of their land or conserve the same amount elsewhere.  The change in law was a boon to agribusiness in the Amazon.

The Conversation reports that the Amazon is actually home to world’s fastest growing tropical agricultural region.  In fact, the biggest use of land in the Brazilian Amazon is for cattle ranching. Land cleared for cattle is the largest cause of deforestation in the Amazon.  Land cleared to graze cattle deteriorates, with nutrients quickly washing out in the rain heavy Amazon.

When the land is no longer useful for cattle grazing, ranchers move elsewhere to clear more land.  Even in areas where more sustainable agricultural practices could be used, ranching often persists due to perceived social advantages.  Like the western US, ranching in the Amazon seems to be romanticized. Nothing is so appealing to the rugged individualist as the idea of a cowboy on the prairie or a gaucho in the jungle.  According to The Conversation, soybean farming is four times more financially successful in Brazil than cattle ranching yet many choose ranching anyway.  It may be this impractical streak that is part of the driving force behind the change in law and in turn destruction of the Amazon.

What complicates this story is the fact that the policy requiring landowners to set aside 80% of their land was never successfully implemented.

The original law created in 1965 actually required only 50% of land to be set aside but was changed to 80% later, so this new change is more a return to the original law.  The sad truth is that never has someone been prosecuted under this law. The law hasn’t been enforced or challenged in court, so the change is really only a change on paper anyway.  Still the change in law shows a shift in popular opinion and public policy away from protection of the Amazon and other land in Brazil.

As I reported last month, Brazil’s newly elected president, Jair Bolsonaro, is also a threat to the country’s rainforest and seems extremely unlikely to intercede on behalf of conservation.  The Guardian reported after Bolsonaro’s election he still plans to combine the Ministry of Agriculture and the Ministry of the Environment.  This is a move benefiting Brazil’s agribusiness and mining sectors, both strong supporters of Bolsonaro. Marina Silva, a former environment minister and presidential candidate, commented that this change will damage Brazil’s reputation in climate talks.

Bolsonaro himself has been unsteady on his position to the Paris Climate Accord, flipping back and forth leaving some wondering about Brazil’s future in the talks.  Initially, Bolsonaro said he’d pull Brazil out of the Paris Climate Accord but then said he’d stay in if there was no restriction to the development of lands from the Andes through the Amazon to the Atlantic.  It seems like staying in the accord with no deforestation limits on such a huge expanse of land would only be lip service. Deforestation in the Amazon is proceeding as normal at breakneck speed. 52,000 square kilometers of Amazon rainforest is lost every year.  Since Europeans have arrived in South America and colonized it, there have been plans to cut the forest, to turn the area into farms and settlements.

Francisco de Orellana was the first known person to navigate the whole of the Amazon River, dressed in clumsy Spanish armor and in a wooden boat.  It seems possible that Native Americans made the trip long before Orellana but we may never know. The journey cost Orellana the lives of many men, Spanish as well as enslaved natives.  The conquistador reported densities of people living in the Amazon that no one has seen since. The idea of cities, whole civilizations hidden in the jungle has long enticed explorers, some like Colonel Percy Fawcett were lost in the jungle and others simply gave up.  Misunderstandings of the realities in a place that offers life and death so freely have contributed to crazed attempts to colonize the Amazon before. In 1928, Henry Ford even attempted to build not only a latex facility but a utopian village in the Amazon rainforest, as reported in The Guardian.  Henry Ford was even quoted as saying,

“We are not going to South America to make money, but to help develop that wonderful and fertile land.”

Today Fordlandia, Henry Ford’s utopia, is nothing but moldering ruins and a modest settlement of 3000 people living among ghosts.  The point of Fordlandia is that the Amazon isn’t easily molded to western civilization’s ideas. People can clear the jungle and put cattle on the land but it doesn’t mean they can do so forever.  It’s far easier to destroy the Amazon than to use it.