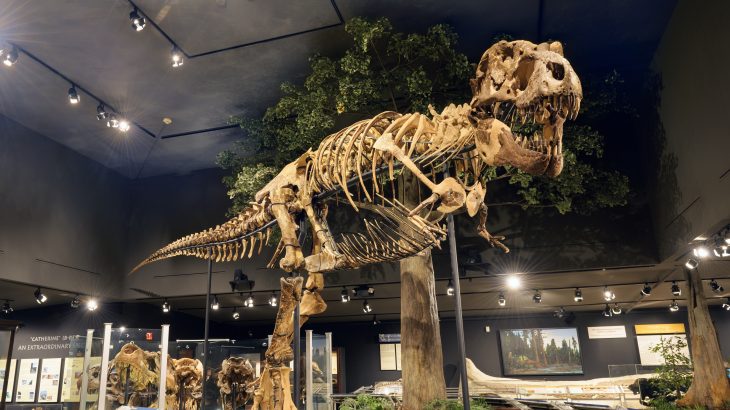 A new study estimates that a total of 2.5 billion Tyrannosaurus rexes lived and died before the species went extinct. This is the first time that experts have managed to compute population numbers for long-extinct animals.

The study was led by Charles Marshall, who is the director of the University of California Museum of Paleontology and a professor of Integrative Biology at UC Berkeley.

The researchers found that about 20,000 adult T. rexes probably lived at any given time. Professor Marshall said that what few paleontologists had fully grasped, including himself, is that this means that some 2.5 billion lived and died over the approximately two and a half million years the dinosaur walked the earth.

“The project just started off as a lark, in a way. When I hold a fossil in my hand, I can’t help wondering at the improbability that this very beast was alive millions of years ago, and here I am holding part of its skeleton – it seems so improbable.”

“The question just kept popping into my head, ‘Just how improbable is it? Is it one in a thousand, one in a million, one in a billion?’ And then I began to realize that maybe we can actually estimate how many were alive, and thus, that I could answer that question.”

Professor Marshall emphasized that the study involves a large amount of uncertainty. He explained that the total number of T. rexes that existed over the lifetime of the species could have been anywhere from 140 million to 42 billion.

“In our study, we focused in developing robust constraints on the variables we needed to make our calculations, rather than on focusing on making best estimates, per se.”

The greatest uncertainty in these numbers, said Professor Marshall, centers around questions about the exact nature of the dinosaur’s ecology, including how warm-blooded T. rex was.

The study is based on data published by John Damuth of UC Santa Barbara that relates body mass to population density for living animals in a relationship known as Damuth’s Law. While the relationship is strong, ecological differences result in large variations in population densities for animals with the same physiology and ecological niche, said Professor Marshall.

For example, jaguars and hyenas are about the same size, but hyenas are 50 times more prevalent in their habitats compared to jaguars.

“Our calculations depend on this relationship for living animals between their body mass and their population density, but the uncertainty in the relationship spans about two orders of magnitude,” said Professor Marshall.

The researchers estimated that the likely age a T. rex reached sexual maturity was at 15.5 years, and the dinosaurs likely lived into their late 20s. The team calculated the weight of a full grown T.rex at about seven tons, and determined that the average population density was about one dinosaur for every 100 square kilometers.

With a total geographic range of about 2.3 million square kilometers, and the existence of the species for roughly 2.5 million years, a standing population size would have been around 20,000. Across 127,000 generations, this would have totaled 2.5 billion T. rexes.

“If we restrict our analysis of the fossil recovery rate to where T. rex fossils are most common, a portion of the famous Hell Creek Formation in Montana, we estimate we have recovered about one in 16,000 of the T. rexes that lived in that region over that time interval that the rocks were deposited,” said Professor Marshall.

“We were surprised by this number; this fossil record has a much higher representation of the living than I first guessed. It could be as good as one in a 1,000, if hardly any lived there, or it could be as low as one in a quarter million, given the uncertainties in the estimated population densities of the beast.”

“In some ways, this has been a paleontological exercise in how much we can know, and how we go about knowing it.”

“It’s surprising how much we actually know about these dinosaurs and, from that, how much more we can compute.

“Our knowledge of T. rex has expanded so greatly in the past few decades thanks to more fossils, more ways of analyzing them and better ways of integrating information over the multiple fossils known.”

The framework, which the researchers have made available as computer code, also lays the foundation for estimating how many species paleontologists might have missed when excavating for fossils, said Professor Marshall.

“With these numbers, we can start to estimate how many short-lived, geographically specialized species we might be missing in the fossil record. This may be a way of beginning to quantify what we don’t know.”