The best place to look for ancient life on Mars may be underground • Earth.com 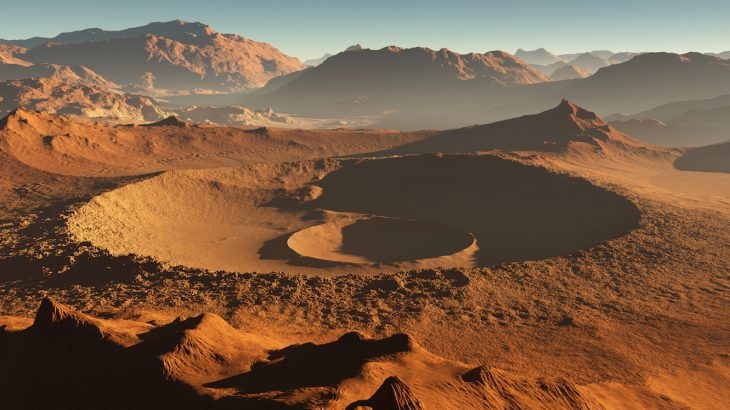 Life on Mars has always been a major topic of discussion when considering if alien lifeforms could exist – or ever once existed sometime in the past. A new study has found that far back in Mars’ history, the planet may have been home to the right conditions to make life underground a possibility.

In a study published in Earth and Planetary Science Letters, researchers from Brown University report that enough chemical energy may have flowed through Mars’ subsurface region to support the existence of microbial colonies similar to the ones that thrive here on Earth.

Even though sunlight may not have been able to reach this area, the researchers suggest that it contained plenty of dissolved hydrogen, which would act as an “electron donor” to allow subterranean microbes to live.

“We showed, based on basic physics and chemistry calculations, that the ancient Martian subsurface likely had enough dissolved hydrogen to power a global subsurface biosphere,” says Jesse Tarnas, a graduate student at Brown. “Conditions in this habitable zone would have been similar to places on Earth where underground life exists.”

Areas where microbes exist underground on Earth are known as SLiMES (subsurface lithotrophic microbial ecosystems). These microbes don’t get their energy from the sun, instead they “peel” electrons from the molecules in their environment. In many cases, dissolved molecular hydrogen is the source for this fuel. This new study suggest that the process of radiolysis could have created hydrogen below the surface of ancient Mars.

“The question then becomes: What was the nature of that subsurface life, if it existed, and where did it get its energy,” says Jack Mustard, a professor in Brown’s Department of Earth, Environmental, and Planetary Sciences. “We know that radiolysis helps to provide energy for underground microbes on Earth, so what Jesse did here was to pursue the radiolysis story on Mars.”

The researchers assessed data from the gamma ray spectrometer on NASA’s Mars Odyssey spacecraft for their study, determining the quantities of radioactive elements such as thorium and potassium. Through this process, they were able to determine the abundance of uranium as well. The decay of these radioactive elements drives the radiolytic breakdown of water. So the researchers could estimate how much water would have been available, which revealed that there likely would have been plenty running through the crust’s porous rocks.

Geothermal and climate models were also used in the study to figure out where microbes may have been able to live – which helped the scientists find a supposed habitable zone several kilometers thick.

Ultimately, the research team believes this study could help guide the search for ancient life on Mars.

“The mission of the 2020 rover is to look for the signs of past life,” explains Mustard. “Areas where you may have remnants of this underground habitable zone – which may have been the largest habitable zone on the planet – seem like a good place to target.”