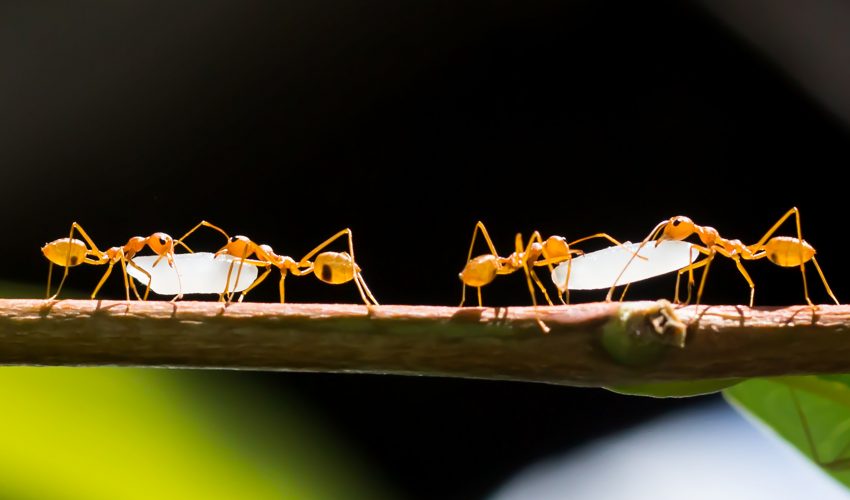 Humans, at least in western culture, are extremely quick as a whole to draw black and white, irrevocable lines between themselves and other animals.  “Humans use tools,” they say, ignoring primates, birds and even polar bears who’ve done the same.  One such thing a person might intone to imply human superiority is human agriculture.  Humans are not alone in being agriculturalists though.  In fact an order of animal which participates in agriculture is all around us, in our gardens, on our sidewalks, perhaps even in your kitchen.  Ants do in fact herd and ‘milk’ other insects.  Ants do in fact grow crops.

I’ve watched a line of ants carrying small pieces of cut leaves through the forest in Ecuador.  Near Mindo, I watched ants using a barbed wire fence as part of their route through the dense vegetation of cloud forest.  The ants marched along the perfectly straight wire of the fence.  In other places, an entire caste of ants is dedicated to cleaning and maintaining what can only be described as trail systems.

Tiny but clear as day, trails lead from the ant colony through the forest to trees where leaves are clipped.  One of the more amazing parts of the system is that the ants don’t actually eat the leaves themselves.  Instead, the leaves are used as a mulch to grow a fungi which the ants farm and then eat.  Some leaves in tropical forests have fungicides built into them, ants must be careful.  Ants can often detect the fungicides in leaves and then ignore them but just to be careful, new plants are used in small test batches before being introduced to the whole fungi farm.

Another type of ant builds small “barns” around weevils that suck sap from plants.  The weevils produce a sugar water type of waste called ‘honey dew’ that ants love.  The ants protect the weevils from predation with their barns and also attack anything that threatens them.  In turn, the ants collect the honey dew and bring it back to their colonies.  Often the ants are in a mutualistic relationship with the plant the weevil is feeding on.  The plant provides ‘extra floral nectaries’ that is organs that produce nectar.  The nectaries are designed to attract ant colonies, which generally help prevent animals from eating the plant.  Ants can be bribed by weevils and others.  Caterpillars feeding on plants sometimes have specialized ‘ant organs’ that secrete a sugar water substance.  Ants encountering the sugar water of caterpillars know a good thing when they see it.  Usually an ant will kill any insect feeding on a host plant but the sugar ‘bribes them’.

Beyond simply being allowed to live, caterpillars have vibrating organs to call ants to their rescue.  Not so much a noise, as a vibration sent through the substrate of the plant, ants come running to the caterpillar at the alarm.  Ants will attack things like parasitic wasps determined to lay eggs in the caterpillar’s body all for the sweet sugary secretion.

Beyond ants, it’s not hard to see honey bees as being close to agriculture themselves.  Bees don’t plant flowers it’s true but their gathering of nectar and pollen in a systematic way for the survival of a whole colony is far from simple grazing either.

Humans should keep in mind that ants growing fungi have been around much longer than human farmers and in some cases inspired them.  In Nicaragua there’s a Baile del Zompopo, or leaf cutter ant dance.  The dance is a slightly Christianized celebration of Xolotl, an indigenous harvest god.  Dances celebrate their crops being saved from red ants by Xolotl, and march like leaf cutter ants, waving branches above their heads.  It seems even the ants must have worshipped the god of agriculture, whatever you consider that to be.