It’s not just primates - other animals also use tools in surprising ways • Earth.com 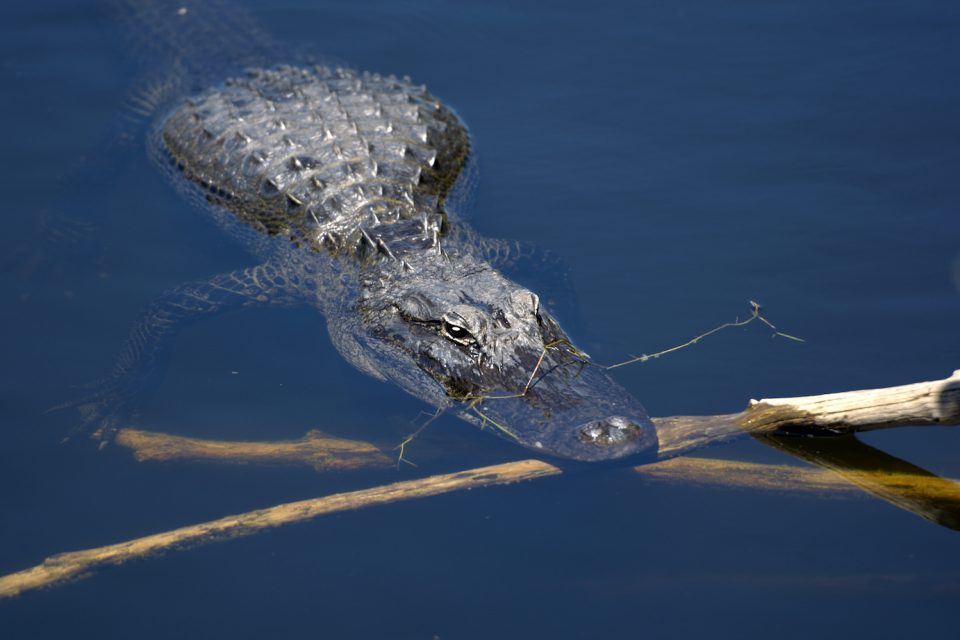 Many people know that gorillas can use sticks to collect and eat termites. As we have reported, chimpanzees have been recorded making ‘drinking sticks’ by chewing wood to make it absorbent before dipping it into water. Other primates, including monkeys have been using stone tools for at least a few thousand years. These are all fascinating insights into how some of our relatives think and manipulate the world around them.

These examples are widely spread in the media partially because they’re interesting but also partly because they allow us as humans to reinforce our own homocentric worldview. It’s obvious to many that other primates use tools, even if they’re relatively crude and easy to fashion. But further from the limelight, there are examples of other animals bearing little resemblance to us who also use tools in surprising ways.

It’s easy to miss a crocodilian floating in a pond, swamp or river. The large reptiles are usually incredibly still, their success at hunting dependent on a cold-blooded patience. A quick glance may fail to distinguish between a clump of algae, a submerged log, and a snout full of deadly teeth hidden in dark water. An American alligator (Alligator mississippiensis) lying motionless with sticks on it’s head doesn’t seem very surprising. What is surprising is the subtlety of the alligator lying in the water with sticks covering its snout.

Vladimir Dinets, et. Al, published research pointing out an interesting correlation between two crocodilians, alligators and mugger crocodiles (Crocodylus palustris), sticks and nesting birds. As you might expect, it’s not wise for a bird to collect sticks off the snout of an alligator laying in wait, although sometimes birds like egrets seem to be in a rush to make nests and mistakes are made. Inevitably, birds that collect sticks from the snouts of alligators or crocodiles are snatched up as quick meals by the speedy reptiles.

The really interesting thing is that the alligators at least seem to understand when birds are nesting. The behavior is timed to coincide with nesting time when sometimes alligators will be found lying just beneath sticks hidden in the water below heron and egret colonies. At times of year when the birds aren’t collecting sticks for their nests, the behavior seems to stop. Crocodilians seem to be deliberately using sticks to lure the birds to them. This is the first reliable account of reptiles using tools. Using hunting lures is a very rare example of tool use in non-humans indeed, but it’s not the only surprising example.

Cuttlefish are known to show cunning as well. Cuttlefish are well known for their ability to change the color and patterns on their bodies, almost instantaneously. The ability to change color patterns is used for camouflage but also for communication. Male cuttlefish have been observed using half their bodies to try and entice a female in with a mating display while displaying a different non-threatening display that makes him look female towards rival males on the other side.

The Guardian reports that there are many more instances of cephalopod intelligence. Some octopuses have been taught to release food by pulling a lever. More interesting, though, are the things that octopuses learn on their own. Observers have watched as an octopus hid itself in a coconut shell, some octopuses guard the entrance to their den by stacking rocks. These last two are clear examples of animals using tools.

Birds such as crows and ravens in the Corvid family are famous for their intelligence. National Geographic reports that New Caledonian Crows (Corvus moneduloides) use sticks and stones as tools. The birds have been seen using sticks to pull out grubs and dropping rocks in containers of water to raise to level of the liquid. Like octopuses, crows in captivity have been able to learn complex puzzles and games for food as a reward. Audubon reports that there is anecdotal evidence of crows leaving ‘gifts’ behind for people who feed them. People sometimes find keys, or candy hearts or other objects apparently left by crows at bird feeders.

It’s possible that these are examples of the birds giving something in exchange for food but it’s also possible that crows learned that leaving things behind excited people who then leave them more food. Recently a man found pull tabs, like those on soda and beer cans, threaded through pine branches near his feeder, claiming that it was an example of not only a crow gift but of art made by crows. It’s hard to substantiate an individual claim like this one but experts aren’t yet willing to say crows didn’t do it. Either way, it’s clear that corvids are capable of making such ‘artifacts’ whatever their purpose. When you start to look closely, there are examples of animals using tools everywhere.

Research published in Scientific Reports shows that otters use rocks to crack open mussels to eat, and there’s even an archaeological record of these rocks used by otters left in the ocean. Elephants are well known as being intelligent, so it’s no surprise that they use tools sometimes. Scientific American reports that elephants have been observed moving objects to use as ‘step stools’ to reach food. Elephants also use sticks to shoo away flies and to scratch themselves. Other animals further from humans also use tools in their own way. Leaf cutter ants harvest pieces of plant on which they grow a fungus that they eat, a rare case of an insect agriculturalist.

The closer we look at other life on Earth, the more we see that our own prejudices might be blinding us to the reality of other minds.