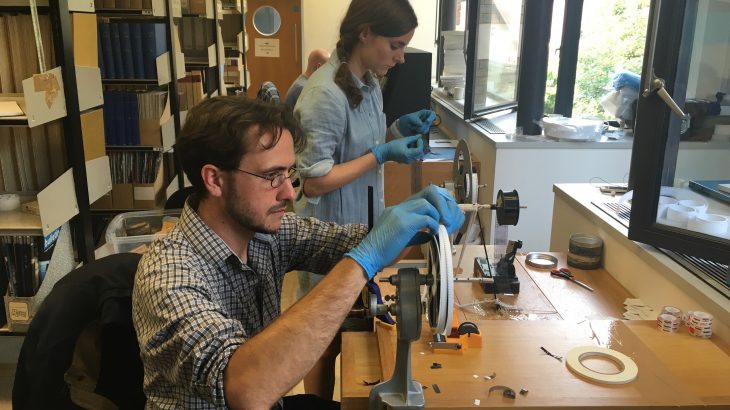 Radar data captured on 35-millimeter film in the 1970s and newly digitized has provided researchers with a rare look at the Thwaites Glacier ice shelf in West Antarctica.

The film doubled the records of Antarctic monitoring data in terms of how far back researchers can go into the history of Antarctica’s ice shelf.

A team of researchers from Stanford University and Cambridge University was able to digitize the radar data taken during flight surveys recorded between 1971 and 1979.

Not only does the film provide a further look back into the history of Antarctica’s ice shelf, but the researchers found that the Thwaites Glacier ice shelf is thawing faster than previously realized.

“You can really see the geometry over this long period of time, how these ocean currents have melted the ice shelf – not just in general, but exactly where and how,” said Dustin Schroeder, the lead author of the study. “When we model ice sheet behavior and sea-level projections into the future, we need to understand the processes at the base of the ice sheet that made the changes we’re seeing.”

Future studies can use the data to compare modern radar data with baseline conditions during the 70s to track changes and melting over 40 years, which will help with future sea-level rise projections.

The radar data shows a world covered in ice, including mountains, lakes, and volcanoes that lie beneath Antarctica’s surface.

The researchers were able to identify ash layers from volcanic eruptions and areas where the ice is thinnest due to water eroding the bottom of the ice shelf.

“By having this record, we can now see these areas where the ice shelf is getting thinnest and could break through,” said Schroeder. “This is a pretty hard-to-get-to area, and we’re really lucky that they happened to fly across this ice shelf.”

The film and the findings show how important historical data and accurate records are in informing our understanding of Antarctica and to future climate projections.

It may be old data, but it’s still extremely valuable, according to the researchers.

“It was surprising how good the old data is,” said Schroeder. “They were very careful and thoughtful engineers, and it’s much richer, more modern looking, than you would think.”