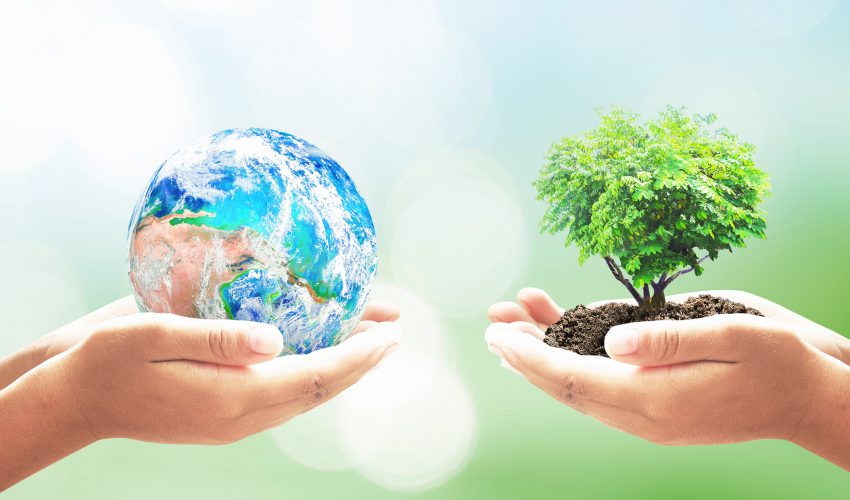 Earth Day was first envisioned in its current form during the social struggles of America in 1970.  Separately, John McConnell, an activist living in San Francisco, and Gaylord Nelson, a Senator from Wisconsin, turned to Americans for a day of grassroots activism promoting and celebrating Earth’s natural environment.  Gaylord Nelson chose April 22 as his first Earth Day, the date springing from earlier celebrations of Arbor Day.

Arbor Day was originally promoted in the dusty, windblown state of Nebraska, most likely as a common sense practical way of making life on the prairie more bearable.  Trees of course hold down soil important for agriculture, provide shade and are used for basic building materials. As a journalist who moved to Nebraska with his family in 1854, Julius Sterling Morton encouraged pioneers to plant trees in his writings.

Soon becoming the Secretary of Nebraska Territory, Morton’s influence grew and in 1872, he first proposed a holiday dedicated to planting trees, the first Arbor Day.  Prizes were offered for the counties and individuals that planted the most trees on that first Arbor Day, leading to an estimated one million trees planted in Nebraska on that first day.  As a new state, Arbor Day was made an official holiday in 1874 set on April 10, eventually the day was changed to be celebrated on Morton’s birthday April 22. Gaylord Nelson, a fellow inhabitant of the midwest in Julius Sterling Morton’s Nebraska, was happy to make his first Earth Day on April 22.

John McConnell, the peace activist turned environmentalist of San Francisco, first chose another spring day, the Spring Equinox, for his Earth Day celebration in 1970.  Equinox marks the changing seasons as the day in spring when the day and night are equal in length. In choosing the spring Equinox, McConnell seemed to choose a day the Earth itself set, a natural holiday bearing little connection to the human calendar.

McConnell wasn’t the first to notice the Equinox and celebrate it.  In choosing the Equinox, McConnell invokes in the imagination ancient ceremonies, midnight dances in glades or amidst sacred oak groves.

Easter also has connections to the Equinox.  The Bible says that Jesus’ death and resurrection occurred around the Jewish Passover, a holiday set at the first full moon after Equinox.  The name Easter has an origin stranger and more pagan than the holiday’s association with Passover. It comes from an old Germanic goddess of fertility and spring, and when you look closely at the non-Christian symbolism, it becomes obvious it’s not all about Jesus.  Flowers, rabbits and eggs are all great symbols for spring, fertility and rebirth of a different type than biblical resurrection. The church was very adept at doing appropriated earlier pagan celebrations, which now remain mostly in the superficial Easter trappings of candy and Easter Egg hunts.

There are other less well known celebrations of the Equinox.  In the ancient Maya City of Chichen Itza, what many see as the intentional shadow of a feathered serpent climbs down the stairs of the towering 79-foot tall Pyramid of Kukulkán during the spring and fall equinoxes.  The central tower of the storied ruins of Ankor Wat in Cambodia was built so that it aligns directly with the rising sun on the Spring Equinox. Hovenweep Castle in the western United States and the more famous Stonehenge both seem to accord significance to equinox.

The date in spring is a good time to celebrate as well.  Even if you’re not celebrating the spring weather by dancing around a May Pole dedicated to a Roman goddess of flowers or attending midnight feasts, the weather is hard to resist.

Recently I attended a celebration of Easter consisting of a Native American vigil starting on Saturday and continuing all night ‘til Easter morning.  The ceremony was multi-faceted and like no other ceremony I’d ever attended or even knew of. The church was an open courtyard surrounded by a few open-air Ramadas.  One Ramada was obviously Christian, with an altar littered with icons of the Orthodox Catholic variety. In front of the Christian Ramada, a Maypole dance wove intricate ribbons around a pole, a dance and ceremony undoubtedly pagan, probably originating in a Roman celebration of a flower goddess.  A mesquite fire burned in front of another Ramada where dancers enacted a deer dance. The main dancer wore a deer head tied on top of his own, blindfolding him in a way that signifies the man as a mere conduit of the deer which sees instead of the human medium. Music of rattles, drums, harps fill the Ramada.  Rattles made of cocoons filled with gravel adorn the dancer’s legs and hoof rattles are tied around his waist. To my European eyes, the dance is reminiscent of celebrations of the horned nature god, sometimes called Pan.

The first celebrations of Earth Day were the beginnings of an environmental awakening for American college students in particular.  The date of April 22nd chosen by Senator Nelson had other implications beyond nature, as it was a day between spring break and final exams.  In short, the date for the first Earth Day was set to encourage as much college student involvement as possible. The idea was to harness some of the energy from the anti-war movement for the betterment of the environment.

Some of the first forms of activism were simply teach-ins at college campuses; seminars simply teaching the perilous environmental degradation continuing to plague us today.  The seeds these seminars planted bore real political fruit. Only eight years before the first earth day, Rachael Carson’s Silent Spring was published, and Ed Abbey’s Desert Solitaire was published two years before in 1968.  The American Consciousness was being re-awoken to the splendor of nature and the mess often made of it.

This year Earth Day Celebrants are planning on taking on a problem as ambitious as water and air pollution: plastic pollution.  The theme for Earth Day 2018 is “End Plastic Pollution.” It’s ambitious, but Earth Day helped implement the basis for environmental policy in the United States, legislation that has helped protect air, water and other organisms.

Ending plastic pollution is very important, too.  According to plasticpollutioncoalition.org, by 2050 our oceans will contain more plastic than fish by weight.  Disposable plastic is ubiquitous, from bottled water to plastic wrap and bags at the grocery store; the stuff is everywhere.  Plastic rings from six-packs of beer and soda choke turtles and birds, chemicals leeched from plastic slowly poison human blood streams; insidiously joining even mother’s milk.  According to Britannica, 50% of disposable plastic isn’t recycled, it isn’t even sent to landfills, it’s simply tossed into the environment, becoming so much litter.

If you want to celebrate the Earth and if you want to show the powers that be that the environment and ending plastic pollution is important to you, anyone can visit earthday.org to learn about celebrations and activism in your area and how to stage your own public event.