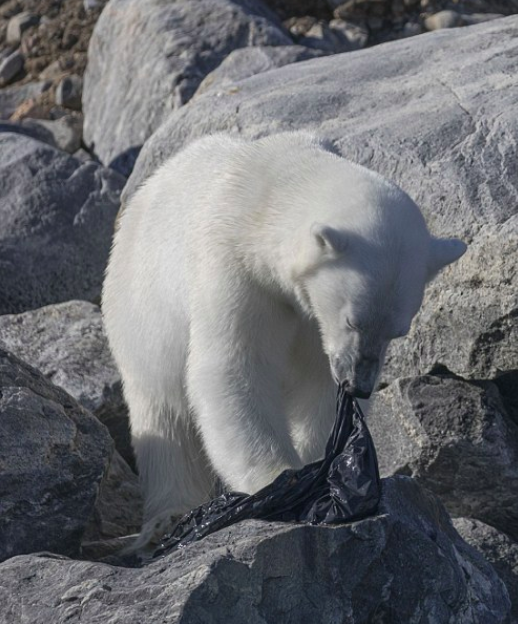 A series of devastating photos recently taken by French photographer Fabrice Guerin are just another in a long string of evidence showcasing how bad the world’s marine plastic crisis has gotten.

The pictures show an Arctic polar bear chewing on a black plastic garbage bag in a futile effort to find food.

Guerin took the photos while visiting the Arctic Archipelago of Svalbard in Norway, and once again showcase how plastic is quite literally everywhere.

Earlier in the year, photos of sea life in the nature preserve of the Galapagos Islands had many experts scrambling to target the source of the plastic and clean up the critical habitat. Plastic waste has even been found at the depths of the Mariana Trench.

According to the Daily Mail, there is an estimated nine million tons of plastic dumped into the ocean each year with little signs of slowing down.

The plastic poses a direct threat to marine wildlife and animals that live and hunt near the water like polar bears and seabirds.

“We were surprised to see this magnificent animal had a plastic bag in his mouth. Fortunately, he didn’t swallow it whole,” Guerin said. “I never thought to see some plastic in this area but I do know there is no frontier for plastic waste. The global production of plastic rises every year and we discover  bottles and plastic bags mostly everywhere.”

The photos also illustrate the importance of ocean conservation and clean up efforts like the massive initiative to clean up the Great Pacific Garbage Patch, which is slated to launch in September of 2018.