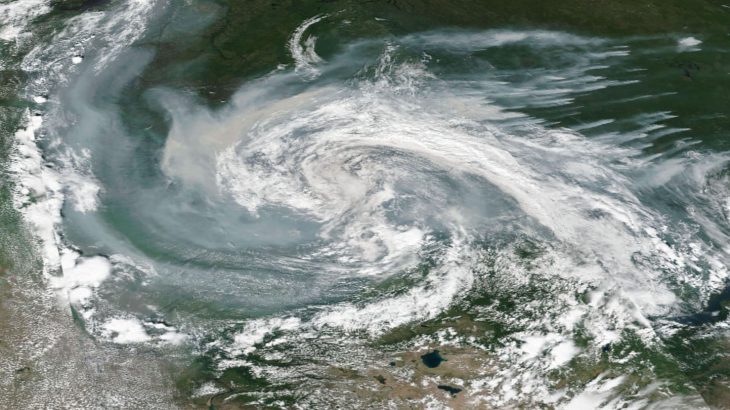 As we reported, ‘unprecedented’ summer wildfires are continuing to burn through the Arctic. More than 100 fires have been reported in the area since June, which was the hottest month on record for the globe.

Satellite images from the Copernicus Atmosphere Monitoring Service (part of the Earth Observation program of the European Commission) show great billowing clouds of smoke traveling across remote regions of Greenland.

But scientists are now turning their attention to the massive amounts of carbon being released in the process.

So far, the fires have released more carbon — 121 megatons — in 2019 than in any of the 20 years since satellite record-keeping began in the Arctic.

The Arctic has emitted more carbon this year than Belgium’s annual carbon output.

However, the Arctic’s wildfire season, which can run to the end of August, is not yet over and more CO2 could be emitted over the coming weeks.

This rapid release of greenhouse gases into the atmosphere will ramp up warming and feed into dangerous climate change feedback loops.

What is unusual about the Arctic’s 2019 wildfire season is the duration of the fires themselves. In the past, fires usually lasted a few days, but some of the wildfires this year have been burning for over a month.

Because the fires are burning up the Arctic’s dry peatland, there’s no telling how long the blazes will last or how far they will spread. So far fires have been reported in Russia, Alaska, and Greenland.

“Boreal Alaska is having a severe fire year, and my guess is that fires will start affecting western Canada,” Merritt Turetsky at the University of Guelph told New Scientist.

With warmer than average temperatures, the permafrost will continue to thaw and provide more tinder for potential fires. Many of the Arctic’s fires likely started due to a lightning strike.

“If the permafrost is melting and there’s more peat and fuel available, it’s dry enough, and there’s lightning, sure you would expect to see something [again],” Mark Parrington, a senior scientist at the Copernicus Atmosphere Monitoring Service, explained to New Scientist.

Longer blazes and more fires mean more carbon emissions, which pose an immediate risk to human health in areas like Alaska, where air quality is low.

A trending pattern in the Arctic is being established, and future wildfires are only projected to get worse.

“The Arctic has historically experienced fire, and the area in Russia that is burning does have a history of fire,” said Turetsky. “But these Arctic fires are expected to occur more severely and more frequently in the future, and the CO2 measurements are a demonstration of how this will influence regional and potentially global emissions.”