The strange story of armadillos and leprosy in the Americas • Earth.com 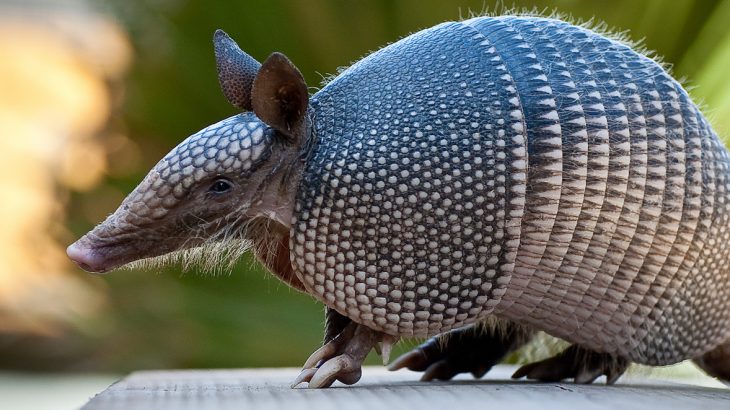 The strange story of armadillos and leprosy in the Americas

Leprosy, also known as Hansen’s Disease, was once feared to be highly contagious but is now known to be a curable bacteria disease that is not easily transmitted. Research suggests that 95% of humans are immune to leprosy, making it a mystery how the disease is spread at all.

According to the American Academy of Dermatology, a healthy person must have months of contact with an infected person to catch leprosy. Often thought of in the context of biblical times, according to the World Health Organization (WHO), there were 211,009 new cases of leprosy reported globally in 2017.

Leprosy is a strange disease that may show symptoms within a year or may be asymptomatic for up to 20 years. Although leprosy is often thought of as exotic or ancient, there are still cases of the disease in the US even as it remains rare. Most leprosy cases in the US are from people who traveled abroad and caught the disease from another person. Perhaps the most interesting and tragic history of leprosy in the US comes from Hawaii, starting before the islands were even part of the US.

In a remote part of the island of Molokai, 8,000 patients were kept in misguided isolation from the outside world to stop the spread of leprosy. According to the National Park Service, the leper colony was created by an act of the legislative assembly of the Hawaiian island, approved by King Kamehameha V.

The new law made isolation in the leper colony compulsory. The last few leper patients in the colony still remain; according to The Daily Beast, there are still six patients. Patients were allowed to transfer to other medical facilities in 1969 but some preferred their isolated home.

Initially, the leper colony was not provided with food but instead expected to farm the lands. Over time, the isolated colony grew into a community with churches, marriages and children who upon birth were removed for adoption outside the colony. The case of the Molokai leprosy colony illustrates the hysteria and confusion surrounding the disease. Although leprosy isn’t easily spread from one person to another, it can and is carried across national borders by travelers.

No one is quite sure how leprosy came to Hawaii; the only certainty is that before contact with the outside world, Hawaii was free of the disease. Most likely, leprosy came to Hawaii by traders or others that visited the islands from outside. Another idea is that a Hawaiian chief travelled abroad and brought the disease back with him. Either way, the establishment of leprosy and its spread throughout several islands combined with a history of fear to cause the forced isolation.

Fear and forced isolation of leprosy patients has lingered in many parts of the world. The Leprosy Foundation reports that it wasn’t until 1996 that forced isolation of patients was abolished in Japan. Another leper colony where people were confined in the US was in Louisiana. Lepers in the Louisiana colony weren’t allowed to vote until the right was restored in 1946, according to the Health Resources & Services Administration. Patients in the colony were guarded as prisoners and called ‘inmates’ until being allowed to leave for two month periods in the 1970s, and eventually the colony became an outpatient treatment facility in the 1980s.

The fact that the second leper colony in the US was in Louisiana is an important fact because leprosy is more prevalent in the southeastern US than any other part of the country.

The southeast is a stronghold for leprosy due to another strange quirk in its natural history. Although the disease isn’t easily transferred to another person, there is one animal that is a ready carrier for the bacteria that cause leprosy.

Colorado State University (CSU) reported last year that researchers found 62% of armadillos in the western Brazilian state of Pará were infected with the bacteria that causes leprosy. The rates of leprosy in Brazilian armadillos are three times higher than those in Louisiana or Texas. Furthermore, the research showed that people who kill, hunt or eat armadillos are at a greater risk of contracting leprosy.

Considering the rates of infection in the southeastern US, it’s likely that people there also face a greater risk of infection from hunting or eating armadillos as well. Taking this into account, it’s easy to see why armadillos might be demonized as disease reservoirs.

Although it’s true that armadillos carry leprosy, researchers believe that humans first transmitted leprosy (an old world disease) to armadillos (new world animals). Leprosy was first brought to Brazil by the slave trade more than 500 years ago and later spread to armadillos.

A recent report in The Conversation shows evidence that armadillos in the United States were only infected with leprosy since the 1960s. Although it’s unknown how armadillos were first infected by humans, it’s possible the small mammal first contracted the disease by digging in infected soil.

Armadillos often dig for food or to create burrows. Leprosy and armadillos seems a strange case of humans spreading a disease to an animal and then catching it from that animal through hunting. So although many people seek to eradicate armadillos due to misunderstanding the odd little creature, doing so may actually increase the risk of leprosy.

It seems the best way to prevent catching leprosy is to leave the shy, armored mammal alone and simply observe them from a reasonable distance. Perhaps humans can learn a bit about zoonotic disease as well as dehumanizing hysteria by looking at the history of leprosy in the new world.