"Artificial leaves" may be a future source of green fuel • Earth.com 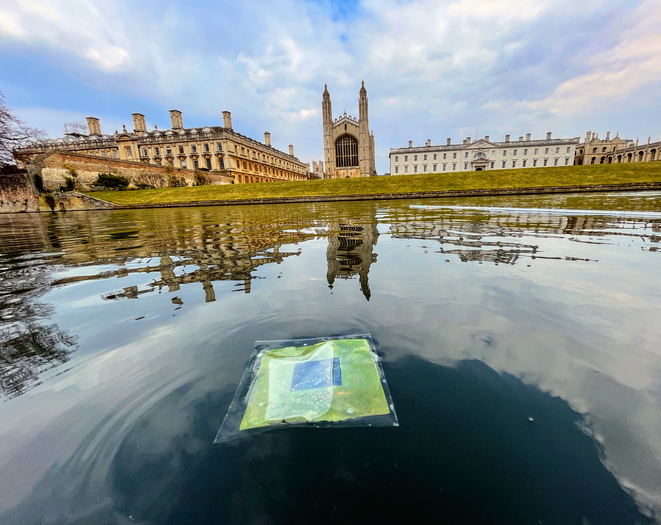 Plants are pretty much unique among living organisms because they can trap the energy of sunlight and use it to make organic molecules that are rich in energy. In this way they create their own fuel that has no unwanted byproducts and that fulfils all their energy needs. Imagine if humans could develop a similar photosynthetic surface that used only water, carbon dioxide and energy from the sun to make green fuels. Well, this is exactly what scientists from the University of Cambridge have been working on.

Although renewable energy technologies such as wind turbines and solar panels have become significantly cheaper and more available in recent years, industries such as shipping remain wholly dependent on fossil fuels. Switching to green energy for an industry such as shipping is a tall order and the subject has received little to no attention in terms of changes that can be made to slow global warming. Around 80 percent of global trade is transported by cargo vessels powered by fossil fuels, so the contribution by this sector to climate change is probably not insignificant.

For several years, Professor Erwin Reisner’s research group at Cambridge has been working to address this problem by developing sustainable solutions to petrol which are based on the principles of photosynthesis. In 2019, they developed an ‘artificial leaf’ that makes syngas – a key intermediate in the production of many chemicals and pharmaceuticals – from sunlight, carbon dioxide and water. Their prototype generated fuel by combining two light absorbers with suitable catalysts. However, it incorporated thick glass substrates and moisture protective coatings, which made the device heavy to transport and to deploy.

“Artificial leaves could substantially lower the cost of sustainable fuel production, but since they’re both heavy and fragile, they’re difficult to produce at scale and transport,” said Dr. Virgil Andrei from Cambridge’s Yusuf Hamied Department of Chemistry, the paper’s co-lead author.

“We wanted to see how far we can trim down the materials these devices use, while not affecting their performance,” said Reisner, who recently led a new research project aimed at slimming down the artificial leaves to make them more adaptable. “If we can trim the materials down far enough that they’re light enough to float, then it opens up whole new ways that these artificial leaves could be used.”

For the new version of the artificial leaf, the researchers used technology from the electronics industry, where miniaturization techniques have led to the creation of smartphones and flexible displays, revolutionizing the field.

The researchers faced the challenge of placing light absorbers onto lightweight substrates and then coating them with waterproofing material to protect them from water infiltration, all the while keeping the structure light enough to float. They overcame these obstacles by using thin-film metal oxides and materials known as perovskites, which can be coated onto flexible plastic and metal foils. The devices were covered with micrometer thin, water-repellent, carbon-based layers that prevent moisture infiltration. They ended up with a device that not only works, but also looks like a real leaf. And it floats on water.

The researchers tested the photoelectrochemical (PEC) artificial leaves on the River Cam and have published their findings in the journal Nature. The experts report that their lightweight, leaf-like PEC devices can split water into oxygen and hydrogen (as happens in plant leaf cells during photosynthesis) and reduce carbon dioxide to produce fuel at rates comparable to those found in photosynthesizing leaves. In addition, the artificial leaves weight less than 100 mg cm−2 and can be scaled up to produce larger structures that can still sustain similar production rates.

“This study demonstrates that artificial leaves are compatible with modern fabrication techniques, representing an early step towards the automation and up-scaling of solar fuel production,” said Dr. Andrei. “These leaves combine the advantages of most solar fuel technologies, as they achieve the low weight of powder suspensions and the high performance of wired systems.”

This is the first time that clean fuel has been generated on water, and if scaled up, the artificial leaves could be used on polluted waterways, in ports or even at sea, and could help reduce the global shipping industry’s reliance on fossil fuels. While additional improvements will need to be made before they are ready for commercial applications, the researchers say this development opens whole new avenues in their work.

“Many renewable energy technologies, including solar fuel technologies, can take up large amounts of space on land, so moving production to open water would mean that clean energy and land use aren’t competing with one another,” said Professor Reisner. “In theory, you could roll up these devices and put them almost anywhere, in almost any country, which would also help with energy security.”