Because the night: A parrot after dark • Earth.com 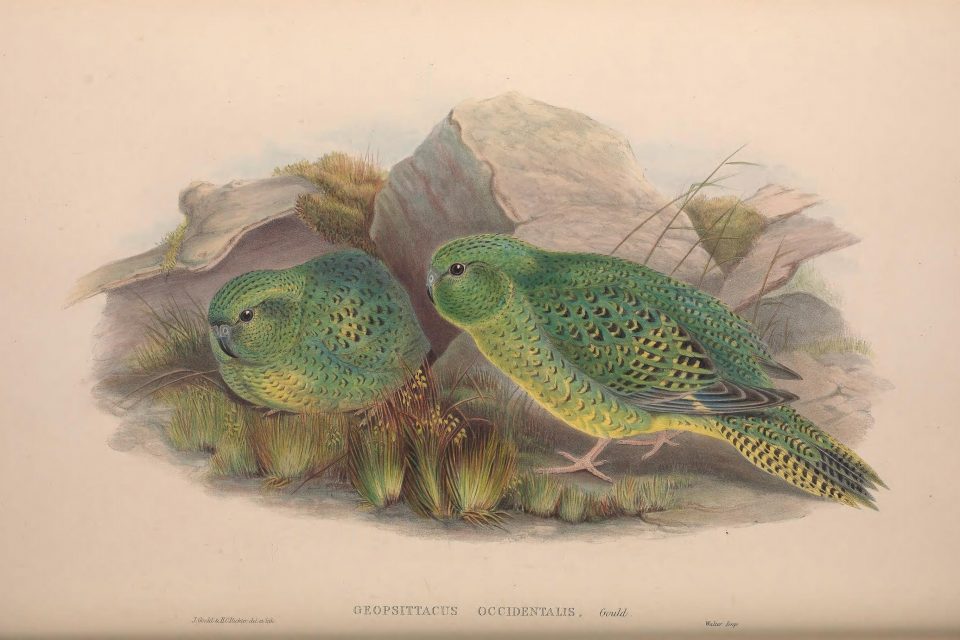 Because the night: A parrot after dark

Some animals haunt the dreams of those who seek them. Like the cities of gold that propelled Coronado and the fountain of youth that drove Ponce de Leon, these creatures drive people to obsession. While such quests are often quixotic—no one has yet made a verified sighting of the thylacine in modern times and the notion that Carcharocles megalodon still plies the deeps is thought to be pure fantasy—sometimes, just sometimes, determination pays off.

So it is with the Australian night parrot (Pezoporus occidentalis), a small, green, ground-dwelling bird that, as its name suggests, is nocturnal.

This unassuming psittacine has been the focus of a small but driven cadre of birders and ornithologists for decades. It was first discovered in 1845 by explorer John McDouall Stuart, who appropriately enough for this story searched for a non-existent inland sea that supposedly occupied the centre of Australia.

Sixteen years later, it was formally described by famed English ornithologist John Gould. Even up to the 1870s, specimens were readily captured; during the 1860s and 70s, naturalist F.W. Andrews collected the majority of the 23 known specimens. The bird was thought to be extinct by 1912, when the last living specimen was shot. (That specimen rotted and was eventually lost.)

Until 1979, no reliable sightings were recorded, though some 70 putative reports were made. That year, a museum curator on a camel-back expedition spotted one briefly. Ten years later, Dick Smith, the businessman and conservationist who founded Australian Geographic, offered up $25,000 for convincing proof of the bird’s continued existence.

In 1990, Australian Museum scientists discovered a decayed and shriveled specimen on a roadside in Queensland, quite by accident. They had pulled over to take a bathroom break and noticed a small, greenish corpse, feathers fluttering in the wind. It was indeed a night parrot. The scientists claimed the reward and donated it to the museum. The species was clearly still alive and breeding.

But it was another 15 years until another reliable sighting occurred in 2005. Scientists conducting a mining risk assessment in Pilbara, Western Australia spotted three birds. As a result of this discovery, the mining company was required to compile a comprehensive management plan for the region in order to offset risks to the population. The next year, another dead parrot, this one a juvenile, was found in Diamantina National Park in Queensland. In a macabre twist, the bird appeared to have decapitated itself by flying into a barbed wire fence.

The trail was getting hotter, to the encouragement of several groups of scientists who were on the hunt. Then, in 2013, John Young, a naturalist who claims to have spent some 17,000 hours searching for the parrot, announced that he had succeeded. After intensive searches in southwestern Queensland, he captured photographs and sound recordings of the night parrot, the first ever.

In response, the conservation group Bush Heritage and the Queensland government established the Pullen Pullen Reserve to protect the population. “Pullen-pullen” is an indigenous word for the night parrot. The exact location of the 56,000 hectare area has not been disclosed in order to deter poachers from capturing specimens for the exotic pet trade. There are thought to be somewhere between 30 and 100 night parrots in the reserve and surrounding arid grassland. GPS tagging of the birds in the reserve has shed light on their habits; notably, they may fly close to 30 miles in a night, likely in search of water.

In 2016, live birds were spotted in Diamantina National Park, where the decapitated bird had been discovered in 2006. Then, in 2017, calls were heard in Goneaway National Park and a specimen was photographed in Western Australia, some 1,200 miles away. A single feather was found lining the nest of a zebra finch nest, located under a wedge-tailed eagle nest, in Kalamurina Wildlife Sanctuary that year as well, expanding the known range of the night parrot to include South Australia.

So, if these birds have persisted across such a large stretch of territory, why has it been so difficult to locate them? For one, most of the areas in which they have been found are incredibly remote and sparsely populated, making research expeditions difficult. Even in these distant locations, they are subject to predation by both native mammals and, more distressingly, invasives such as cats and foxes, making the small populations hard to maintain. And their nocturnal habits don’t help.

They’re also cryptically colored—a mix of light green and yellow, with black barring. Their plumage and plump form somewhat resembles that of the kakapo (Strigops habroptilus), a much larger species of New Zealand parrot that, like the night parrot, is ground-dwelling. (Kakapos are, unlike the night parrot, flightless.) They spend the daylight hours in tunnels formed in clumps of sharp spinifex grass (Triodia sp.), where they also rear their young. The parrots appear to prefer large clumps, some of which may be up to 90 years old. In some areas of Australia, uncontrolled burns have wiped out viable spinifex habitat, so populations are likely fragmented. Encouragingly, in the areas where the birds have been rediscovered, the spinifex clumps are widely separated and often adjacent to rocky outcrops or salt pans, which reduce the chance of fire spreading unchecked. Nestled in their spiny homes, and only emerging at night, their clandestine lifestyle is perfect for evading the prying eyes of humans.

The dogged bipeds who finally located them are intent on preserving their ability to do so.