Back from the dead: Tropical plant rediscovered after 40 years • Earth.com 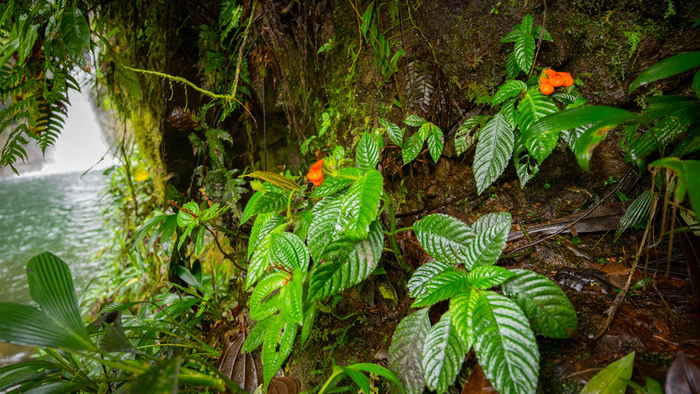 Back from the dead: Tropical plant rediscovered after 40 years

A tropical plant species that was believed to have gone extinct nearly four decades ago has been rediscovered in Ecuador, according to a new study from the University of Miami.

The South American wildflower was first discovered in the 1980s. In 2000, the plant was named Gasteranthus extinctus – in anticipation of its extinction. Much of the forest habitat that these tropical plants depend upon have been cleared or converted for farming.

An international team of plant scientists, including Professor Kenneth Feeley and graduate student Riley Fortier, took an expedition to the Centinela Ridge in western Ecuador to search for Gasteranthus extinctus. Upon their arrival, the experts split up into three groups to explore the forest patches that were still intact.

“Almost immediately, two of the teams found the plant growing along streams,” said Fortier. “We were definitely excited to see it, and because of how bright the flowers are, once we knew what to look for, it was easy to find.”

The plants were also found outside of the Centinela Ridge, which suggests that they are more widespread than expected.

“This is a call for optimism – it shows that some of these species that we thought were extinct are not, and that these little patches of forest that are left behind can help save the diversity of plants and animals in this area,” said Professor Feeley.

“Some of these species have been able to hang on for a long time, but that area is still losing forest as they continue to clear it for agricultural land, so we need to save what we have now to prevent any actual extinctions.”

Professor Feeley said he hopes that this expedition will spark others to explore the remaining forests and discover what other tropical species may or may not be extinct today.

“This highlights a problem of the tropics, which is that we have so little information; until you send a team of top botanists to a location, you’ll never know what is really there,” said Professor Feeley. “The fact that we can’t even be confident about if a species is either alive or extinct just highlights that we need more people out there looking for these species.”

The experts are working with local organizations to protect the two remaining patches of forest that exist in the area. According to Fortier, these two spots represent just 100 hectares of land but contain a host of rare plant species.

“Right now, these forests could be cut down any day, so we want to push to protect them,” said Fortier.

“When botanists first collected plants there, they noted the immense biodiversity of the region, but before they did anything about it, they returned and were completely alarmed by the deforestation,” said Professor Feeley. “Unfortunately, deforestation can happen quicker than science can.”

The study authors emphasized the importance of conserving this diversity to help counter the effects of climate change.

“Preserving biodiversity, especially local biodiversity, is more than just plants and animals. It’s also preserving the water cycle, our food, and much more,” said Fortier. “We are ensuring an easier life for humankind in the long run.”

The study is published in the journal PhytoKeys.