Are bad moods contagious? They are among ravens • Earth.com 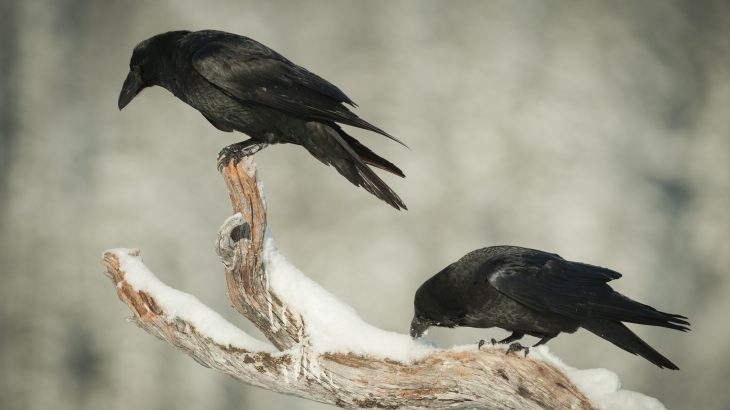 Are bad moods contagious? They are among ravens

A new study has found that a grumpy raven can pass along its bad mood to other ravens.

The study, conducted by researchers from the University of Vienna, sheds light on how emotions and empathy are understood and felt among animals other than humans or primates.

As social creatures, we need to be able to communicate and understand each other successfully.

Unlike empathy, emotional contagion involves catching an emotion the way you might catch a common cold, and it’s a phenomenon that can spread just as quickly.

Have you ever had your mood changed just by sitting next to a crabby co-worker or friend? Congratulations, you’ve experienced emotional contagion, a mimicking behavior that researchers have proposed helps social groups transmit information.

Now, researchers have discovered evidence of emotional contagion among ravens.

For the study, ravens were paired up and completed several experiments. In one, a pair of birds were presented with two boxes, one that was empty and one that had food. Once the birds were familiar with the setup, the researchers introduced a third box to the mix.

The third box was used to test cognitive bias or an error in judgment that influences decision making. In this case, how pessimistic or optimistic each bird felt about exploring the third box.

Next, the researchers split the pairs up and had one raven choose between a food it liked and one it didn’t. The other raven in the couple observed its teammate’s behavior but did not see what choices were given.

The birds paired up again later and were given the cognitive bias test again. A raven that had watched its teammate behave negatively was more suspicious of the third box, indicating that they had been impacted by their raven friend’s bad mood and were pessimistic as a result.

“We demonstrate that after witnessing a conspecific in a negative state, ravens perform in a negatively biased manner on a judgment task,” the researchers wrote. “Our findings thus suggest negative emotional contagion in ravens, and in turn advance our understanding of the evolution of empathy.”

The findings were published in the journal Proceedings of the National Academy of Sciences.