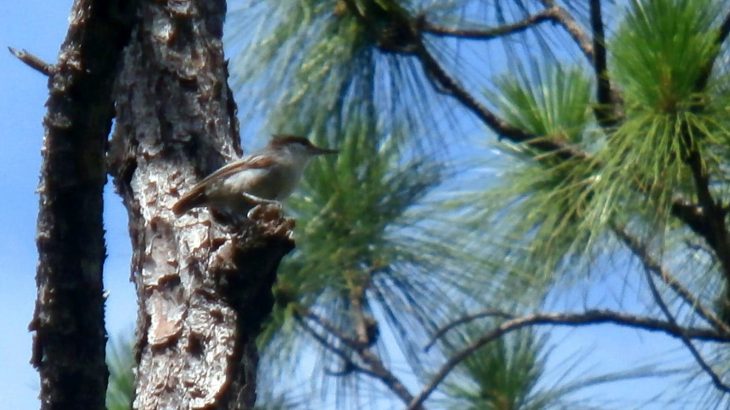 Extinction can be a difficult thing to verify.  It’s impossible to say with certainty when the last individual of an animal, plant or fungi dies.  There could always be one left hiding somewhere.

In 2004, reports came in from Arkansas of an Ivory Billed Woodpecker sighting that was later published in 2005 by a team from the Cornell Lab of Ornithology.  Other reports came in from Florida in 2005, and in January 2017, a scientist with the Naval Research Laboratory published a report of ten sightings of Ivory Billed Woodpeckers.  Some of these sightings even have photographs and videos with them.  Many of these reports seem fairly substantial but it’s been impossible to verify them and prove the existence of living Ivory Billed Woodpeckers.  C. principalis remains in the no man’s land of ‘probably extinct’ along with plenty of company.

The Bahamian pineyards are dominated by Bahamian Pine (Pinus caribaea var. bahamensis) but also is abundant with itchy poison wood and small palms among other plants.  I once spent a summer in the pineyards of Abaco Island collecting field data on the Cuban Amazon, or Abaco Parrot (Amazona leucocephala) a bird which may or may not be a distinct species.  The pineyards on Abaco are forests with thin soils over the rocky limestone that makes up much of the Bahamas.  The pineyards seem strange to someone familiar with either more northerly pine forests or tropical hardwood forests, what makes it interesting is that it has features of both.

Because the Bahamian pineyards are unique and distributed to only a handful of relatively small islands, it makes anything that lives solely in them rare.  Thus, the Bahamian Nuthatch is naturally rare by evolving in a small environment. Indeed, the Bahama Nuthatch is one of the rarest birds in the western hemisphere.  East Anglia University reported that there was an estimated population of 1,800 individual birds in 2004.  Only 23 individual birds were found in a survey in 2007.

Populations of the Bahama Nuthatch have probably been on the wane since at least the 1950s due to their habitat being destroyed by logging and tropical storm damage.

The Cozumel thrasher (Toxostoma guttatum) is another example of how vulnerable small island populations can be vulnerable to being wiped out by hurricanes.  The thrasher, native only to Cozumel, a small Mexican island off the Yucatan peninsula may now be extinct, the final push possibly coming from hurricane damage.

Recently, an expedition lead by masters students Matthew Gardner and David Pereira from University of East Anglia, collaborating with Birdlife International and the Bahamas National Trust undertook an expedition to find out if any Bahama nuthatches remain.  Another team of researchers led by Zeko McKenzie with the University of the Bahamas-North supported by the American Bird Conservancy also started looking for the Bahama nuthatch.  Both teams ended up finding the bird in May of this year.  The researchers from University of East Anglia surveyed more than 700 km of forest on foot and stopped at 464 survey points.  This was one of the most exhaustive research expeditions in the Bahamas to date.

Science Daily reported that the University of East Anglia team made six sightings of Bahama nuthatches throughout their expedition.  It was impossible for the team to identify the sex of the birds or how many of them there were, especially since only individuals alone were ever seen.  The nuthatch was seen in three distinct parts of an area known as Lucaya Estates on Grand Bahama Island. The other team led by a Bahaman researcher, found two nuthatches together, which is more encouraging.

Unfortunately all that can be said with certainty is that there are at least two Bahama nuthatches in the wild.  Without seeing more than two at a time, researchers could simply be seeing one individual over and over again. Science Daily quotes Matthew Gardner of University of East Anglia:

“During three months of intensive searching we made six Bahama Nuthatch sightings. Our search was extremely thorough but we never saw two birds together, so we had thought there might only be one left in existence… The other team have reported seeing two together so that is promising. However, these findings place the species on the verge of extinction and certainly amongst the world’s most critically endangered birds.”

Sadly, the Bahama nuthatch numbers may be so low that nothing can be done to prevent the bird’s eventual extinction.  Researchers aren’t even sure what actions should be taken if the bird’s survival was prioritized, many of the drivers of the nuthatch’s population decline are unknown, especially the last precipitous decline in its population.  The only hope for the Bahama nuthatch may be that there is a population hiding on some other island in the Bahamas, less well surveyed than Grand Bahama.