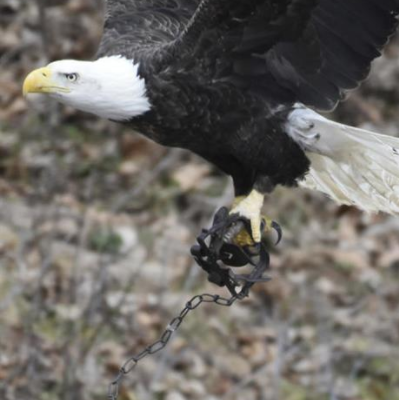 The bald eagle has been the U.S. national emblem for over 200 years, chosen because of its immense strength, majesty, and longevity. It’s understandable, then, that Americans become distressed at seeing one of these beautiful creatures harmed in any way.

This was the case on Sunday when a photographer noticed a bald eagle with a leg hold trap attached to its foot.

Photographer Susan Boardman observed the bald eagle moving around on the ground in the woods in Bonneauville, Pennsylvania. She noticed that the bird seemed to be struggling before she saw the leg trap, which was attached to a long chain. Although it had trouble getting off the ground, the eagle managed to fly away, trap in tow.

Leg hold traps are used to catch fur-bearing animals such as foxes, wolves, raccoons, and bobcats. They are supposed to be placed in such a manner that the bait isn’t visible from the air.

Wildlife rehabilitators and bird-welfare volunteers have sounded the alarm and are on the lookout for the unfortunate bird. Large birds of prey can be dangerous to people who aren’t trained in handling them, so experts urge caution to anyone who may spot the eagle.

“There’s really not much the average person can do,” wildlife rehabilitator Wendy Ebersole told the York Dispatch. “Obviously, no one should try to handle the bird.”

She worries that if the bird can’t be located and the trap removed in a timely manner, the bird won’t survive. Eagles need the use of their talons in order to catch food, eat, and defend themselves from predators, she said.

Boardman agrees. In an e-mail to the Associated Press, she said, “Without intervention, this eagle will probably die. He can’t hunt or fly high enough to get out of harm’s way. It was heartbreaking to see him like this.”