Bearded seals may not be loud enough to survive noise pollution • Earth.com 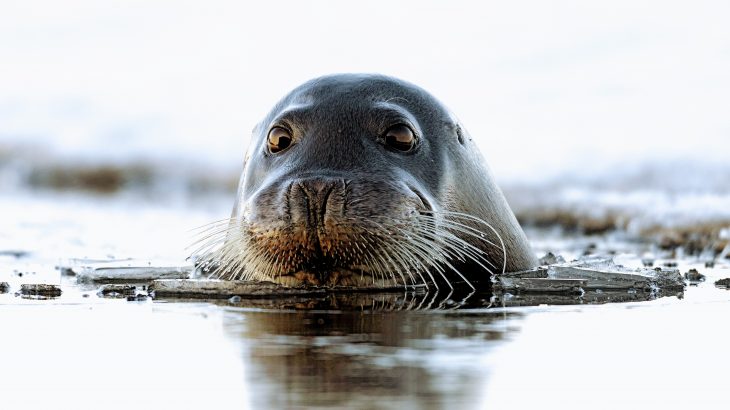 Bearded seals are loud, but they may not be loud enough to handle the interference of human activities, according to a new study from Cornell University. Ambient noise is increasing in the Arctic, and the researchers found that this threatens the reproductive success of bearded seals.

“As Arctic sea ice declines, industrial activities and associated anthropogenic noise are likely to increase,” explained the study authors. “Documenting how seals respond to noise and identifying naturally occurring behavioral thresholds would indicate either their resilience or vulnerability to changing soundscapes.”

During mating season, male bearded seals make extremely loud calls to attract a mate. Even their vocalizations that are considered quiet can be as noisy as a chainsaw.

The seals have to crank out calls that are loud enough to be heard over their competitors. Prior to this study, the response of seals to elevated noise was not yet known, despite the fact that they rely on sounds to successfully mate and reproduce.

The experts set out to gain a better understanding of how resilient bearded seals can be to changes in ambient underwater noise.

“The goal was to determine if there was a ‘noise threshold’ beyond which seals either couldn’t-or wouldn’t-call any louder in order to heard. By identifying this naturally occurring threshold, we can make conservation recommendations about how loud is too loud for human activities.’

Under the ice near Utqiagvik, Alaska in the springtime, the sea is flooded with the vocalizations of male bearded seals, and the collective noise is described as “otherworldly.”

In the rapidly changing Arctic, noise from industrial activities is predicted to dramatically increase in the next 15 years. As a result, bearded seals will have to change their calling behavior if they are going to be heard above the noise generated by ships and commercial activities, but the researchers found that there is only so much they can do.

The team listened to thousands of bearded seal vocalizations that were recorded over two years in Arctic Alaska. Each call was carefully measured and compared to the concurrent ambient noise conditions.

The study revealed that bearded seals grow louder as underwater noise levels increase. However, the experts found an upper limit to this behavior.

When ambient noise gets too high, bearded seals are no longer able to compensate enough by turning up the volume. The distance that their calls can be heard decreases alongside the increase in ambient noise.

“Given that these are reproductive calls, it is likely that the seals are already calling as close to as loudly as possible-the males very much want to be heard by the females,” said Fournet. “So, it is unsurprising that there is an upper limit. I’m grateful that we have been able to identify that limit so we can make responsible management choices moving forward.”