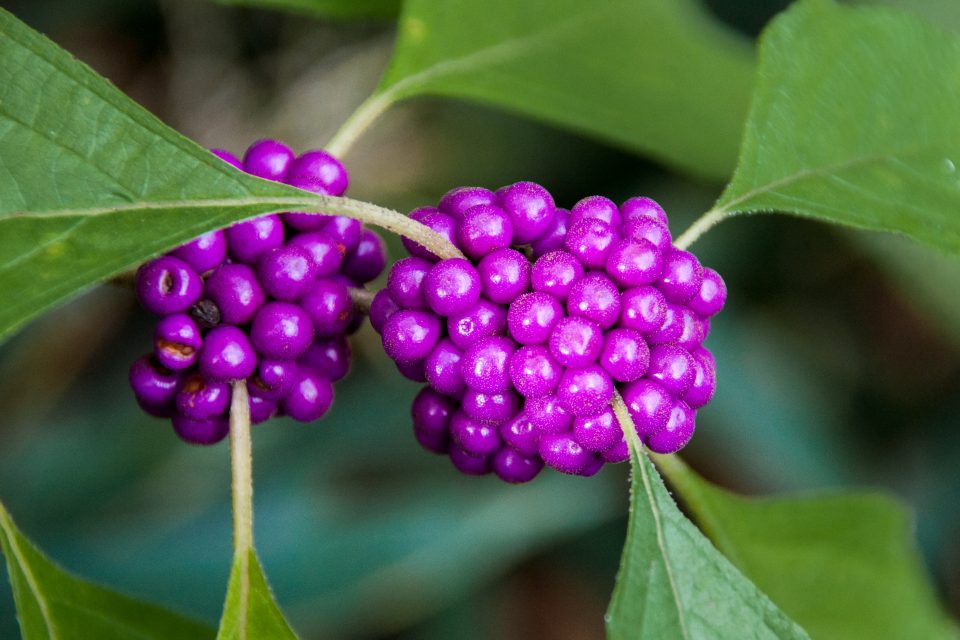 In a groundbreaking new study, experts have found a natural compound that can be used to fight “superbugs.” The scientists discovered a substances in the leaves of a common shrub, the American beautyberry, that can restore an antibiotic’s power against resistant staph bacteria.

Lab experiments showed that in combination with oxacillin, the beautyberry compound was able to knock out resistance to the drug of methicillin-resistant Staphylococcus aureus (MRSA).

The research was led by scientists at Emory University and the University of Notre Dame, and is published in the American Chemical Society’s Infectious Diseases.

The American beautyberry, Callicarpa americana, is native to the southern United States. The shrub grows large clusters of bright purple berries that are eaten, and then dispersed, by birds and deer.

Study co-senior author Cassandra Quave is an assistant professor in Emory Health Sciences and a member of the Emory Antibiotic Resistance Center. Professor Quave is an expert in the field of medical ethnobotany, researching how indigenous people incorporate plants in healing practices to uncover promising candidates for new drugs.

“We decided to investigate the chemical properties of the American beautyberry because it was an important medicinal plant for Native Americans,” explained Professor Quave.

The Alabama, Choctaw, Creek, Koasati, Seminole and other Native American tribes relied on the American beautyberry for a variety of medicinal purposes. The leaves were boiled to treat malarial fevers and rheumatism, the roots were boiled to treat dizziness and stomach aches, and the bark was used in formulas to relieve itchy skin.

In previous work, Professor Quave found that extracts from the leaves inhibit the growth of a bacterium that causes acne. The current study was focused on the potential for leaf extracts to fight MRSA.

“Even a single plant tissue can contain hundreds of unique molecules,” said Professor Quave. “It’s a painstaking process to chemically separate them out, then test and retest until you find one that’s effective.”

The researchers identified a compound that inhibited the growth of MRSA, but only slightly, so the team tested the substance combined with beta-lactam antibiotics.

“Beta-lactam antibiotics are some of the safest and least toxic that are currently available in the antibiotic arsenal,” said Professor Quave. “Unfortunately, MRSA has developed resistance to them.”

In the lab, the researchers found that the beautyberry leaf compound synergizes with the beta-lactam antibiotic oxacillin to eliminate MRSA’s resistance to the drug. The next is to see if this concoction is effective using animal models.

“We need to keep filling the drug-discovery pipeline with innovative solutions, including potential combination therapies, to address the ongoing and growing problem of antibiotic resistance,” said Professor Quave.

According to the Centers for Disease Control and Prevention, 2.8 million people get an antibiotic-resistant infection every year in the U.S., and more than 35,000 people die.

“Even in the midst of the COVID-19, we can’t forget about the issue of antibiotic resistance,” said Professor Quave. She noted that many COVID-19 patients are receiving antibiotics to deal with secondary infections brought on by their weakened conditions, raising concerns about a later surge in antibiotic-resistant infections.

The study is published in the journal ACS Infectious Diseases.