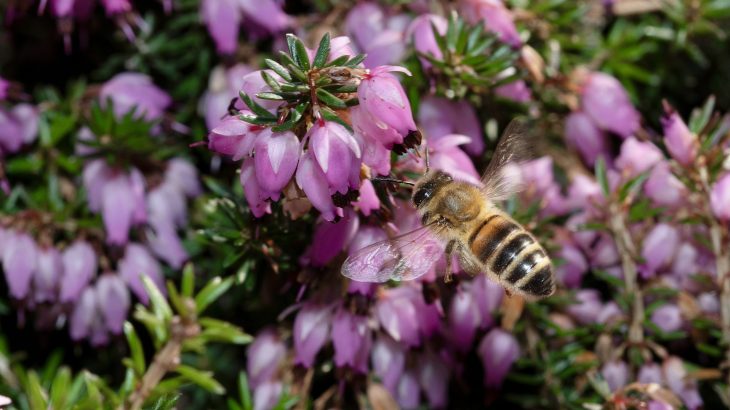 In a new study from the University of Sussex, experts have uncovered new details about the relationship between plant and bee diversity. The researchers identified a link between flower morphology and energy efficiency that affects the foraging behavior of bumblebees and honey bees, allowing them to successfully co-exist.

It is not unusual to see both bumblebees and honey bees foraging on the same flower species, but it turns out that this competition is mediated by the bees’ energy efficiency.

The energy that bees use to walk or fly among flowers is dictated by their weight. In other words, a bee that is twice as heavy will require twice the energy. In addition, the amount of energy that is collected by bees in the form of nectar depends on how quickly they move from flower to flower.

The ratio of these two factors – body weight and the rate at which bees visit flowers – determines their overall energy efficiency.

“While they forage on the same flowers, frequently we find that bumble bees will outnumber honey bees on a particular flower species, while the reverse will be true on a different species growing nearby,” explained Professor Francis Ratnieks.

“What was remarkable was that differences in foraging energy efficiency explained almost fully why bumble bees predominated on some flower species and honey bees on others.”

“In essence, bumblebees have an advantage over honey bees in being faster at visiting flowers, so can gather more nectar (energy), but a disadvantage in being larger, and so using more of the nectar energy to power their foraging. On some flower species this gave an overall advantage to bumble bees, but on others to honey bees.”

The investigation was focused on the behavior of more than 1,000 individual bees and 22 different flower species in southern England. The experts timed the bees to find out how many flowers they visited in one minute.

“The energy efficiency of foraging is particularly important to bees. The research showed that the bees were walking (and flying) a challenging energy tightrope; half the energy they obtained from the nectar was expended in its collection,” said study co-author Dr. Nick Balfour.

According to the researchers, the fact that honey bees and bumblebees do not compete head on for nectar is reassuring in terms of conservation and co-existence.

“Bee conservation therefore benefits from flower diversity, so that should certainly be a focus on bee conservation efforts. But fortunately, flowering plants are diverse.”

Dr. Balfour said that whether you have a window box, allotment, or a garden, planting a variety of flowers or cutting your grass less often can really help pollinators during late summer.