Bee virus is not as dangerous as the mite that carries it • Earth.com 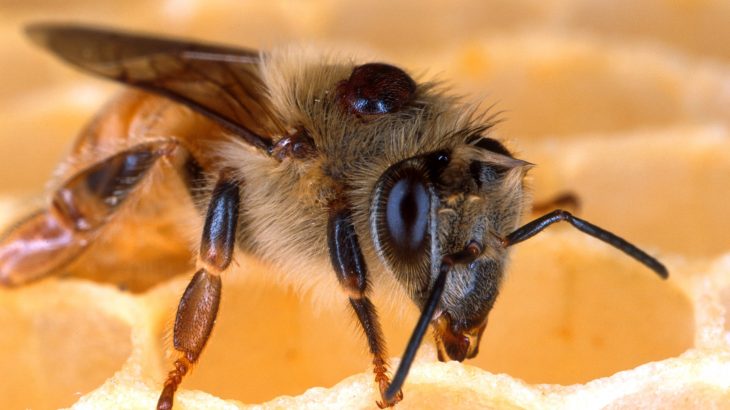 Australia is extremely protective of its bees, and for a good reason. It’s the only country that doesn’t have to deal with the Varroa mite, a parasitic mite that feeds off of honey bees and has been linked to the transmission of the deadly Deformed Wing Virus.

No bee products that could contain or spread the virus are allowed into Australia and beekeepers work hard with legislatures to protect their bee colonies from the virus.

But a new study conducted by researchers from the University of Sydney has found that the mite and virus relationship has been largely misunderstood and Deformed Wing Virus doesn’t pose as much of a threat as previously thought.

It was believed that the Varroa mite transmitted extremely virulent strains of the Deformed Wing Virus, but it turns out this is not the case.

Instead, the researchers found that the mite is far more dangerous and efforts to protect Australia’s bees should incorporate new ways to ready bees for potential infestations as it’s only a matter of time before the mite invades Australia’s.

“The prevailing wisdom is that the mite selects for very virulent strains of the virus,” said Madeleine Beekman, a member of the research team. “For that reason, the virus is now known as a very dangerous virus, and the Australian beekeepers are adamant this virus should not get into the country. But our work shows that the virus is more likely to be an innocent bystander.”

The researchers published their new findings in the journal Proceedings of The Royal Society B: Biological Sciences.

For the study, the team injected honey bee pupae with large quantities of the virus and tracked the transmission of the virus as it spread throughout the colony, looking specifically for any changes in the severity or virulence of the virus that could be explained by this transmission.

Typically, the mite will go from bee to bee and spread the virus. However, the researchers found that contrary to popular belief, the mite chooses a transmission route that selects against more dangerous and virulent viruses.

The virus that remains, the Deformed Wing Virus, is also not deadly.

“Our work therefore changes our understanding of the effect Varroa has on Deformed Wing Virus and the health of honey bee colonies,” said Beekman. “It means we don’t have to be scared of the virus. Instead, we need to focus on eliminating the mite and reducing its numbers.”

The researchers say that more must be done to protect the bees against the mite as this is not the biggest threat to Australia’s bee populations.

“If we want to protect the bees, it now no longer seems to make sense to try to combat the virus,” said  Beekman. “Instead, there needs to be a renewed focus on ensuring the number of mites in honey bee colonies remain low.”