Beetles escape in frog feces after being swallowed • Earth.com 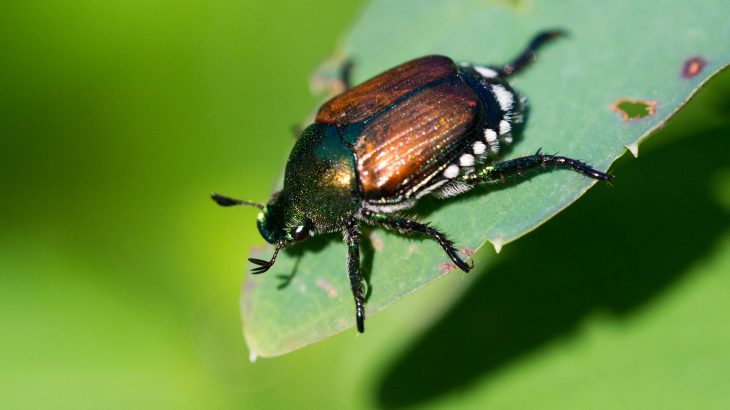 Beetles escape in frog feces after being swallowed

There are some insect species that can actually survive being swallowed by a predator, passed through its digestive system, and excreted in feces. As unlikely as it sounds, experts believe this mode of survival usually happens passively, with no action being taken by the prey to escape.

But in a new study, ecologist Shinji Sugiura of Kobe University has shown for the very first time that insects can actively escape from the guts of predators. Sugiura identified a Japanese species of aquatic beetles that can make a quick exit through the vent, or anus, of frogs.

“Here, I report active escape of the aquatic beetle Regimbartia attenuata from the vents of five frog species via the digestive tract,” wrote Sugiura. “Although adult beetles were easily eaten by frogs, 90 percent of swallowed beetles were excreted within 6 hours after being eaten and, surprisingly, were still alive.”

Sugiura found that the beetles sometimes appeared in the feces in a matter of minutes after consumption, indicating that the beetles are using their legs to move through the digestive tract toward the vent.

Many frog species lack teeth and are unable to kill prey before swallowing it. For this reason, the frogs’ digestive systems play an important role in killing their prey. Sugiura set out to investigate how insects may be able to defend themselves after being swallowed whole.

The aquatic beetle R. attenuata and frog species P. nigromaculatus are frequently found in the same paddy fields in Japan. In lab experiments, Sugiura provided juvenile and adult P. nigromaculatus frogs with adult beetles that had a body length of up to five millimeters.

The observations, which were similar with four additional frog species, indicated that swallowed beetles used their legs to move to the frog vent through the digestive system.

Sugiura explained that when beetle legs were experimentally fixed with wax, all of the treated beetles were killed in the frogs’ digestive system and finally excreted more than 24 hours after consumption.

Pressure from the frog’s sphincter muscle keeps the anus closed, so the beetles would not be able to exit through this vent without manipulating the frog to open it. Sugiura speculates that R. attenuata likely stimulate the frog’s gut to promote excretion.

“This study is the first to document active prey escape from the vent of a predator and to show that prey may promote predator defecation to hasten escape from inside the predator’s body,” said Sugiura.