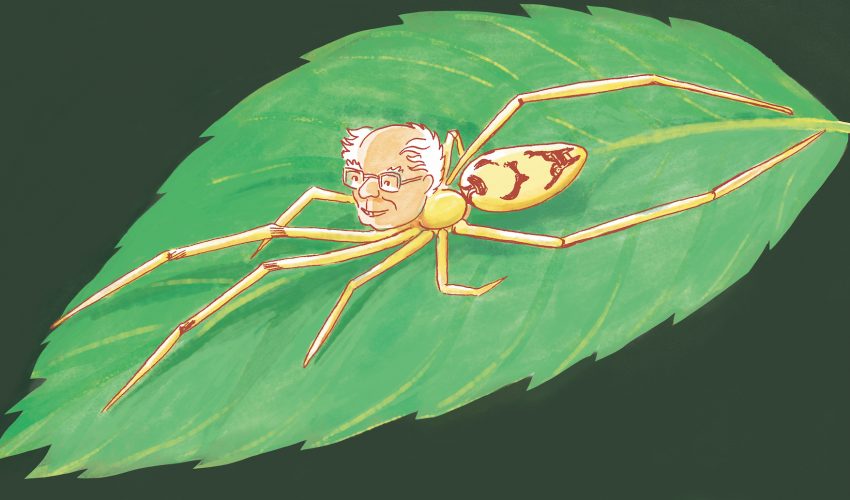 Scientists have discovered 15 new species of  “smiley-faced” spiders in the Caribbean, including one named after Bernie Sanders.

The research was conducted by students from the University of Vermont (UVM) and published in the Zoological Journal of the Linnean Society.

The students, led by Ingi Agnarsson, a professor of biology at UVM, were able to name the spiders and chose to honor many top political figures and celebrities.

Among the names chosen for the spiders were Barack Obama, Michelle Obama, Leonardo DiCaprio, and, unanimously picked by the researchers, Bernie Sanders.

“In naming these spiders, the students and I wanted to honor people who stood up for both human rights and warned about climate change–leaders and artists who promoted sensible approaches for a better world,” said Agnarsson.

The students deeply respect Bernie Sanders and hope to help memorialize his legacy by naming a new species of spider after him.

“It is my hope that through naming that spider after Bernie we can remember the ideas that he has at this pivotal point in the life of our nation,” said Lily Sargeant, one of the student researchers.

“It is through a diversity of perspectives that we achieve innovation in science and I appreciate how much the Obamas value diversity,” Sargeant added.

Previously thought to a be a widespread species that can be found in many parts of the world, the UVM students instead found that there were many endemic species of smiley-faced spiders.

The discovery of the new species has sparked talks on conservation practices in the Caribbean, and further studies may bring to light even more biodiversity.