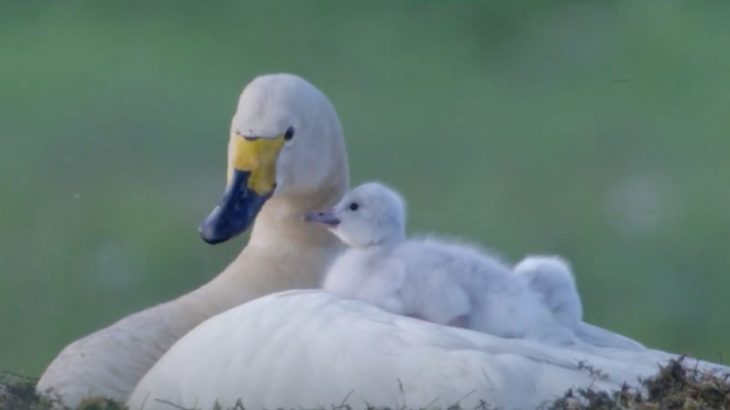 Over the last 50 years, the wintering grounds for Bewick’s swans has shifted east by hundreds of kilometers, or nearly 13 kilometers per year, in northwestern Europe. According to a research team led by the Netherlands Institute of Ecology, the transition has potential consequences for the conservation of the swans.

Despite being a protected species, Bewick’s swans have been declining in Ireland, Britain, and the Netherlands.

“This decline in northwest Europe was not consistent with our data on breeding success and survival,” said study co-author and animal ecologist Rascha Nuijten. “That’s why we started this research.”

Over the years, scientists have speculated that the Bewick’s swans are suffering as a result of one or more factors, such as the disappearance of wetlands, climate-related changes in vegetation, or predation from other animals

For the current study, an international team was formed that included members from the Netherlands, Estonia, and the United Kingdom. One of the first clues the team followed was that the number of wintering swans was actually increasing in Germany.

Bewick’s swans migrate across long distances between their breeding area in the Russian tundra and wintering grounds in northwestern Europe.

“We found that both the time spent in the wintering grounds and the location of those wintering grounds changed significantly over the past fifty years,” said Nuijten. “The time has been reduced – what we call ‘short-staying’ – and the area has shifted east, towards the breeding area: ‘short-stopping’.”

“We see a similar shift east in the 5°C temperature line across Europe in winter. This would suggest that the changes in the swans’ wintering behavior are driven by the warming of the climate.”

Instead of hunkering down somewhere in Britain or the Netherlands for the winter season, the Bewick’s swan is now wintering hundreds of kilometers to the east. This significantly shortens the migratory journey to their breeding grounds.

Over the last five decades, the swans have been arriving at wintering grounds later and leaving earlier. Overall, the researchers estimate they have cut their winter stay short by almost nine weeks.

“We found out that individual swans are not changing the duration of their stay during their lifetime. So the observed shifts were caused by directional differences between generations,” explained Nuijten.

The findings suggest that Bewick’s swans are able to adapt to climate change – at least to some extent. According to Nuijten, what the observed changes mean for them in other times of the year is not yet clear. But it does have consequences for the optimal conservation and management of the species.

“Some places have become much less important for the swans and other places much more. So when it comes to nature conservation and management, species dynamics – in relation to climate change for instance – need to be taken into consideration.”

The study is published in the journal Global Change Biology