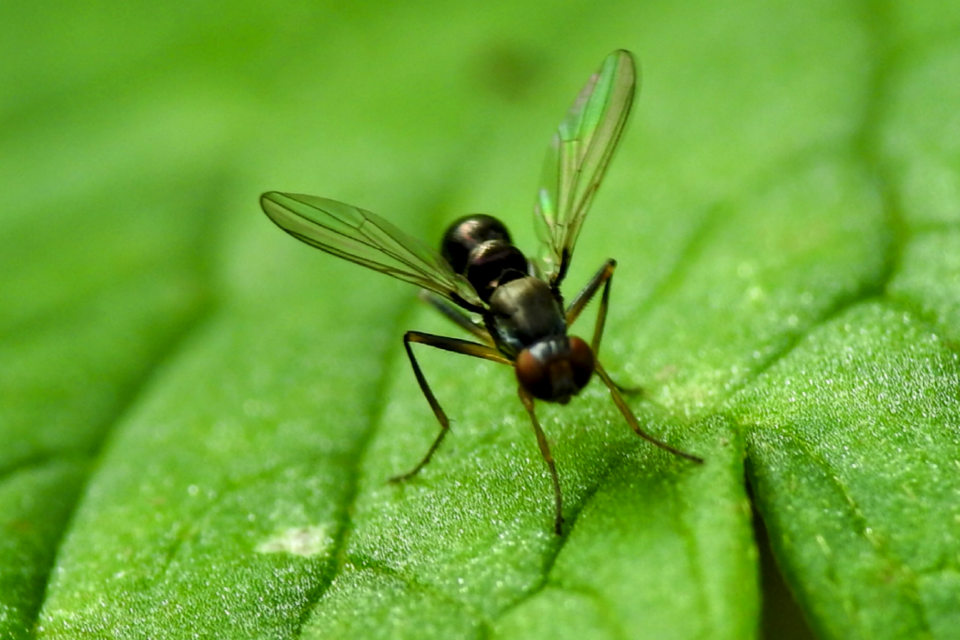 Birds and bats are eating midge flies that contain pesticides

Non-biting midge flies (Chironomus riparius) are common in North America and Europe where they are often known as blood worms due to the red coloration of the larvae. These insects lay their eggs in bodies of fresh water and the larvae develop in the sediment at the bottom. When they metamorphose into adult midges, they leave the water and continue their life cycle on land.

The aquatic life stages of these insects may take place in water bodies that are polluted by pesticides, fungicides and herbicides that run off from agricultural lands. Mixtures of pesticides, fungicides and herbicides are applied to farms, forests, yards and gardens and, when it rains, the contaminants may be washed into nearby streams, lakes and dams.

The larvae of many aquatic insects are known to accumulate these pollutants, particularly legacy pesticides that remain in the environment long after they were banned from use. Moreover, once in the bodies of the larvae, the contaminants are retained and passed from larvae to pupae to adults, as the life cycle progresses. The levels of contaminants carried in the bodies of male and female midges has not yet been compared, and it is also not known whether these insects accumulate currently used pesticides and carry them into adulthood.

Researchers Alexis Roodt and Ralf Schulz from the University of Koblenz-Landau in Germany, and their colleagues, tracked a range of pesticides, fungicides and herbicides throughout the life cycle of female and male non-biting midges. They also estimated the potential consequences for terrestrial insectivorous birds and bats that eat the contaminated flies. The results are published today in Environmental Science & Technology, the journal of the American Chemical Society.

The researchers kept midge larvae in containers with sediment and water, and exposed them to sub-lethal doses of a mixture of nine different pesticides. The exposure was at three different concentrations that were related to levels recorded in the field. They then assessed the extent to which the contaminants accumulated in the bodies of the insects over their full aquatic-terrestrial life cycle.

Larvae that lived in the contaminated environment for 14 days accumulated all of the nine different pesticides, fungicides and herbicides studied, and the adult flies retained most of these compounds after emergence. The process of metamorphosis did, however, lower the levels of the contaminants, except for the herbicide propyzamide which showed up in similar concentrations in larvae and recently emerged adult flies.

Adult female midge flies had higher concentrations of the contaminants, when compared to the males. But, as females mated and died, their contaminant levels generally decreased, which the researchers saw as a consequence of laying eggs and thereby transporting the compounds along to the next generation of midges. By contrast, contaminant levels remained steady for adult males from the time they emerged as flies to the end of their adult lives.

The researchers say that non-biting midge flies are thus a potential source of pesticides, herbicides and fungicides to terrestrial food webs when they are eaten by predators such as birds and bats. They estimated that tree swallow nestlings and two threatened bat species consume low to moderate levels of these contaminants  daily, when they forage on adult-stage midges.

This means that current-use pesticides add to the diverse range of organic contaminants already known to be in the diets of tree swallows and insectivorous bats, some of which are already present at high concentrations.

“Considering the declines in bird and bat populations coinciding with increased pesticide use in recent decades, a better understanding of the potential dietary exposure to organic pesticides is of great relevance,” concluded the study authors.