What’s so special about the Black Hills? Ask the Native Americans • Earth.com 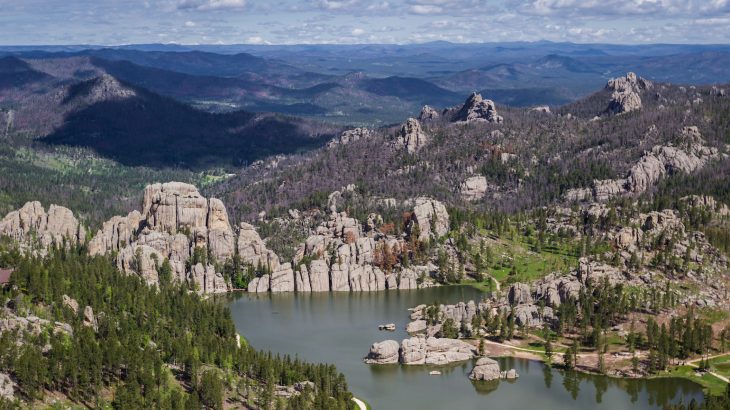 What’s so special about the Black Hills? Ask the Native Americans

The Black Hills are special, not in their size or uniqueness, but because of the landscape they find themselves surrounded by.  Covering part of Wyoming but mostly located in western South Dakota, the Black Hills are a cluster of forested islands in a sea of grassland.

The Black Hills have historically been sacred to different Native American groups, which is a bit perplexing to people like me who’ve spent time in much higher and more awe-inspiring mountains in North America.

Hiking Black Elk Peak is an entirely different experience from these other mountains.  I’ve seen people hiking Black Elk in sandals and I didn’t think they were crazy. The hike is really quite easy, the trail well groomed.  Mt. Elbert is technically simple, no ropes, no gear but you feel the elevation and after a couple of false summits, it feels painful and challenging.  The high points of Montana and Wyoming, although shorter than Elbert are truly challenging, more than just hikes these peaks are mountaineering experiences.  Black Elk in contrast, is little more than a stroll, it’s literally a walk in the park (Custer State Park).

Why would Native Americans find these particular hills special when western Wyoming, Montana and Colorado aren’t very far away and full of higher, more impressive mountains?

Considering the question of The Black Hills supposedly inflated importance, I’m reminded of a story Gary Snyder recounted from his own life in the book, The Practice of the Wild.  Snyder tells of riding in the back of a pickup truck in the Australian Outback with an aboriginal man.  The man starts recounting traditional myths connected to the landscape they’re driving through. The myths are unrelenting, one after the other at a pace hard to follow.  Snyder reflects that the myths were meant to be told by groups of people walking through the landscape rather than driving. At a walking pace, the stories could be told slowly and reflected upon as people pass through a landscape both physical and spiritual.  At a pace dictated by muscles rather than motorized vehicles, the Black Hills start to seem more special.

The drive from Hill City, South Dakota to Leadville, Colorado is only about seven hours, fifteen minutes.  Walking on the other hand the trip takes 151 hours, according to Google Maps.  When one considers time for resting, eating, sleeping the trip becomes much longer in reality.  When one further considers a life where stops for hunting and gathering are the norm as well as inclement weather, the trip starts to seem an improbable one on foot.  Considered in this light, the world starts to seem much bigger and harder to travel through.

Native American groups living in the Black Hills region may rarely if ever have seen the Rocky Mountains.  If someone did see the Rocky Mountains, they’d still be aware that the trip from the Black Hills to greater peaks is a long one across a massive expanse of grass and rolling hills.  Seeing forests of pine trees after days or weeks with nothing but prairie would be incredibly special. We see the world in a significantly different way than people before modern technology.  Not only are massive distances reduced to relatively short car rides or plane trips, the internet, overnight shipping and television create the illusion of bridging distances. You can easily watch video shot halfway around the world from where you sit or eat seafood thousands of miles from the nearest coast.  Bananas, a tropical fruit, are normal fare in states like North Dakota far removed from the world’s equatorial regions.

Some of the nation’s largest mountain lion concentrations are found still around the hills.  Wildlife would’ve only been richer and more plentiful in pre-Columbian times or later before hordes of gold hungry prospectors pushed native people off their land with the help of the US military.

Despite the lower elevation of the Black Hills compared to the more awe inspiring mountains, it’s a place of contrasts.  Granitic spires and forested hills of any size would’ve been surprising and special compared to golden grasslands that seemed to stretch forever.  Likewise, wildlife in the area were there in part because of the intersection of different ecosystems.

The Black Hills, as modest as they seem to a mountaineer, are a place of abundance from the viewpoint of a hunter.  The forests were also a place where teepee poles could be gathered, different herbs and medicines could be found. The hills were also a place that haunted one with their different-ness, caves yawned with no hint to the depths they plumbed (these are still some of the longest caves in North America).  It’s easy to forget that each place is unique and special when you can see the Himalayas or the Amazon or the Sahara any time you have an internet connection.