The lost world of the American Serengeti • Earth.com 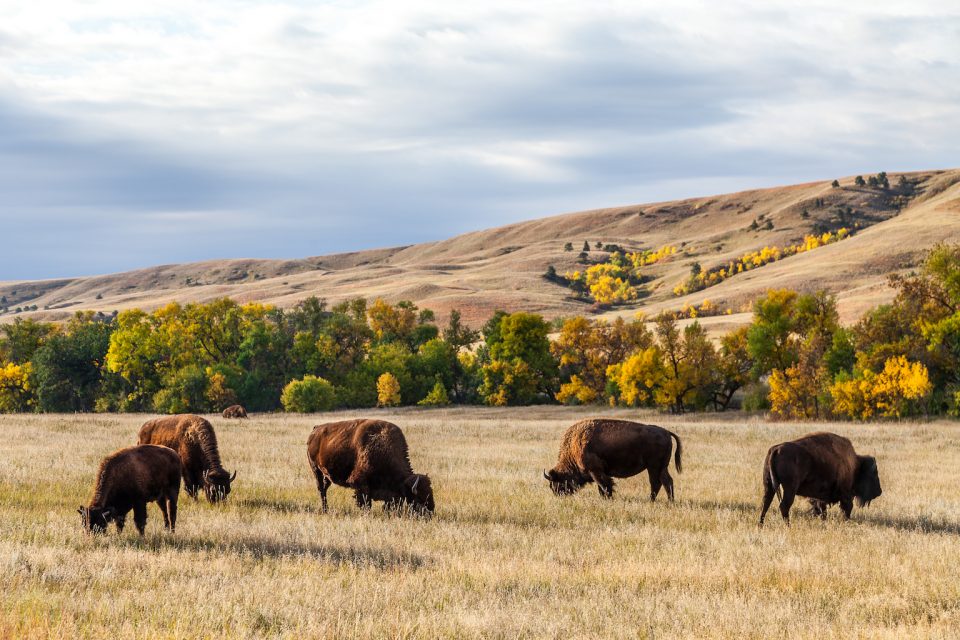 The lost world of the American Serengeti

In fact, it might be the case that Africa’s megafauna survive while similar species have died off in much of the rest of the world because humans first evolved in Africa.  African wildlife may have been given a longer period of time to evolve to the presence of humans, in fact both co-evolved together.

According to defenders.org, there were once around 20 to 30 million bison roaming across broad expanses of North America.  Today the number of bison is down to an estimated half a million, many of which are hybrids of domestic cattle and bison.

Similar to the more famous decline of the American Bison, elk populations are not what they once were.  Grit Magazine reports that an estimated historic population of 10 million elk across North America has dropped to about 1 million elk.  Today elk is thought of as an animal of the Rocky Mountains but before European disturbance, the large ungulate had a much broader distribution.  Elk once grazed across prairies and were distributed much further east as well. With pressure from increased human hunting, elk have taken refuge in the more remote, inhospitable and hard to access parts of America, the higher mountains of the west.

Pronghorns, which are also known incorrectly as ‘antelope’ live in much of the prairie and are probably the most visible of the plains megafauna.  If you drive across lonely expanses of eastern Wyoming or parts of Utah, you’re certain to see the quick running pronghorn. It’s harder to find solid estimates for historic populations of Pronghorn, perhaps partially due to their modern abundance in certain areas.  However the Institute for Wildlife Studies estimates that there were once as many as 500,000 pronghorns in California alone.  The population of Pronghorns in California as of 2013 was close to 3,000.

Brown bears, wolves, mountain lions and other large predators once lived on the Great Plains of North America in numbers.  Now largely ignored or relegated to scattered montane habitats, it’s easy to forget that these animals were once prairie animals as well.

The decline of bison due to commercial hunting and an official government program of eradication to bring plains Indians to their knees hurt many other species.  It’s thought that bison which accidentally died from cold, disease, or accidents like drowning in river crossing once fed bears across the plains. Not only bears would benefit either but also wolves, coyotes, foxes, and even grasses would benefit from the bodies of bison.

Bison and other herbivores were not only instrumental to the integrity of the Great Plains ecosystem as sources of food for predators.  Dung also was important as a food source for beetles and other insects. According to the National Park Service, an average Bison produces about 10 to 12 quarts of dung.  Each individual Bison patty is said to support as many as 300 species of insect.  Insects in turn support bats, turtles, lizards and other small mammals and herps that prey on them.  Of course insects and small animals are important for pollination, spread of plant seeds, herbivory and in general affect the ecology of plants.

Invasive grasses, tamarisk and other plants have forever altered the landscape of North America in ways it’s hard to completely fathom.  New plants and a radical change in herbivory associated with the decline in native megafauna has made the grasslands into something completely different.  Bison and native plants had a long history of co-evolution that is simply not there with domestic cattle which were imported relatively recently from North America.

Plants that have been introduced to the Great Plains vary from well-known plants like Siberian Elm (Ulmus pumila) and Russian Olive (Elaeagnus angustifolia) that are planted in cities to grasses most people never think of being planted.  The situation is complicated by the dynamics between different non-native and native plants.  According to a USGS study, the decline of a high profile invasive plant, Leafy Spurge (Euphorbia esula) is related to the proliferation of exotic grass species.  In turn non-native grasses have hurt native grasses.

Even before Europeans arrived to the scene, North America’s wild prairie ecosystem had begun a radical change.  Once the home to mammoths, mastodons, giant sloths, cave bears, dire wolves and sabre toothed cats, all were extinct before Columbus set sail or the Norse reached North America.

There were once four species of giant ground sloths in North America, all of which went extinct around 10,000 years ago.  I’ve spent time with fossil bone casts of some of these ground sloths, helped putting them together again and they’re truly impressive.  Some of the claws are longer than my whole hand. Megalonyx one genus of giant sloth that lived from about 10.3 million years ago until about 11,000 years ago stood taller than an adult human and weighed around 2,200 lbs when alive.  When you think of sloths, it’s hard to imagine these giant terrestrial animals. It’s easier to imagine giant ground sloths when you know they’re distant relatives of giant anteaters, animals known to eviscerate predators with the enormous claws of their fore paws.

Mammoths and mastodons complete the comparison of the Great Plains with a lost Serengeti.  Like Africa, North America once had elephants of a sort. Mammoths in North America died off later than the ground sloths, living until about 4,500 years ago but were still most certainly extinct by the time Europeans arrived on the scene.  Nathpo.org tells how Thomas Jefferson asked Lewis and Clark to investigate mammoths specifically during their corps of discovery.  It was unknown when they set out whether the mammals were extinct or living in some hidden part of North America.

Some of the megafauna left the Great Plains much later than others.  Unlike cave bears, mastodon, sabre toothed cats or giant sloths, wolves were doing well when Europeans moved west from the first colonies.  Wolves were eradicated throughout the west with a fury it’s hard to understand. The killing and suffering inflicted upon wolves seems to show a sort of madness made Federal law.  People not only killed wolves to collect a bounty, they sometimes tortured them, or poisoned carcasses, killing everything that ate indiscriminately. The shadow of the murder of wolves still lies over the west.  Small amounts of wolves have been reintroduced to Yellowstone National Park and other parts of the west even though a lot of hatred for the canid still remains. Wolves larger relative, the Dire Wolf have long been extinct.

There are still fragments where you can see wide expanses of grassland and even small, heavily managed populations of bison that once roamed wild.  Pronghorn, elk, even a few wolves are out there. Brown bears have taken huge hits and no longer live in most of the west, being extirpated even from the high mountains of Colorado.

One lesson we can learn from the extinction of animals like giant sloths and mammoths is that the world is always changing.  We should cherish the animals we have left, the plants that still remain.  The biggest threat now to the Great Plains is development and encroachment on habitat.  Prairie Dogs are regularly killed by ranchers and others, which in turn hurts Burrowing Owls, Black-footed Ferrets and others.  We should cherish what we have left and allow it to grow. If we can do that, we could once again live on a continent with a habitat that rivals the great plains of Africa.