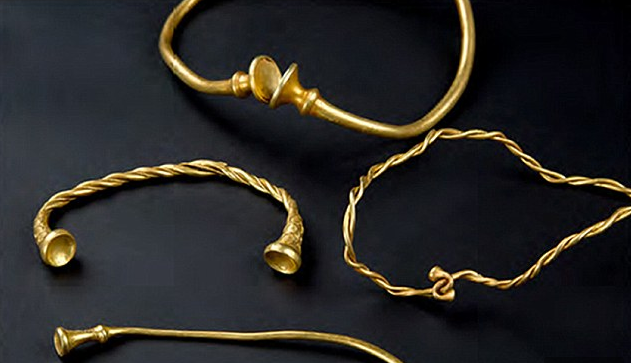 This past December, two men stumbled upon an unusual treasure just below the surface of some farmland in the Staffordshire Moorlands. The pair unearthed four pieces of jewelry that may very well be the oldest Iron Age gold in Britain.

The collection, consisting of three necklaces and one bracelet, has been named the Leekfrith Iron Age Torcs, after the parish where they were found.

A formal evaluation of the exact monetary worth has yet to take place, but discoverers Mark Hambleton and Joe Kania have vowed to split the money 50/50 with landowner Stuart Heath.

Experts in the field believe that the Iron Age gold torcs were made in Europe, most likely France or Germany, in the third or fourth century. Two or the torcs are comprised of twisted gold wire, while the other two have trumpet-shaped finials and Celtic decoration.

“This unique find is of international importance. It dates to around 400-250 BC, and is probably the earliest Iron Age gold work ever discovered in Britain,” said Dr. Julia Farley, curator of the British & European Iron Age collections at the British Museum. “The torcs were probably worn by wealthy and powerful women, perhaps people from the continent who had married into the local community. Piecing together how these objects came to be carefully buried in a Staffordshire field will give us an invaluable insight into life in Iron Age Britain.”

Discoverers Himbleton and Kania are lifelong friends who were encouraged to pursue treasure hunting by Himbleton’s father Roy.

“I used to go metal detecting with my dad when I was young and he said to me ‘why are you bothering fishing? You should be back in those fields,” Hambleton said. “I am so glad we took his advice and pleased of course that he got the chance to see these amazing pieces and prove he was right all along.”