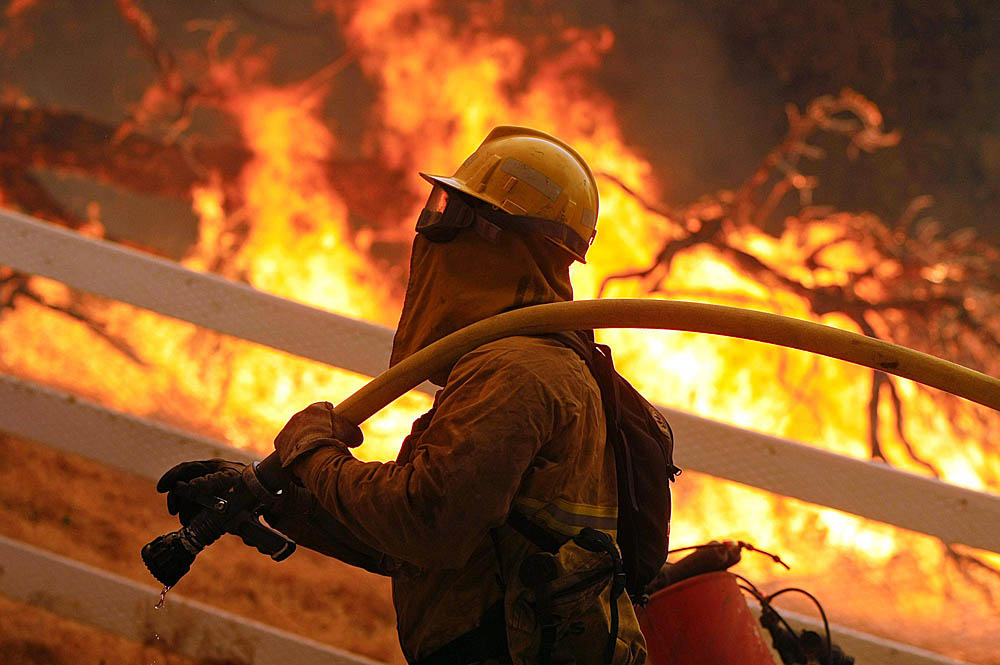 California officials are considering allowing inmates with violent backgrounds to work outside prison walls fighting wildfires, and the idea is generating concerns about public safety.

The state has the nation’s largest and oldest inmate firefighting unit, with about 3,800 members who provide critical assistance to professional firefighters. That’s down from about 4,400 in previous years, however, and so prison officials are looking for ways to add inmates.

Now, only minimum-security inmates with no history of violent crimes can participate. Starting next year, the California Department of Corrections and Rehabilitation is proposing adding inmates convicted of violent offenses such as assaults and robberies, if their security classification level has been reduced after years of good behavior.

Officials also are seeking to allow inmates who have up to seven years left on their sentences instead of the current five. Arsonists, kidnappers, sex offenders, gang affiliates and those serving life sentences for murder and other crimes would still be excluded.

“All it does is enlarge the pool of inmates we look at, but it doesn’t change the nature of the inmate that we put in camp,” Corrections spokesman Bill Sessa told The Associated Press. “We still are not going to put an inmate in camp that has a violent attitude.”

The changes are pending final approval within the Corrections Department. They still have not been sent to the Department of Forestry and Fire Protection, which says it also must sign off.

The proposal comes at a time when the overall prison population is smaller and drought has created the potential for explosive wildfires like the ones that recently roared through the Sierra foothills and communities north of Napa, in northern California.

Mike Lopez, president of the union representing state firefighters who oversee inmates at fire scenes, supports a robust inmate program but worries about what the proposed changes could bring.

“Any acceptance of criminals with a violent background calls into question the security of our membership,” he said, adding, “at what risk is CalFire willing to go to get those inmates?”

CalFire spokeswoman Janet Upton said her agency and corrections officials formed a committee this summer to consider how best to keep the firefighter program adequately staffed. She wouldn’t comment on the proposed changes other than to say “nobody is interested in seeing this program go away.”

The inmate firefighting program started during the civilian manpower shortage of World War II and now includes a small number of women and juvenile offenders. Volunteers must be healthy and pass a two-week physical fitness training program before they complete two weeks of classes on fighting fires.

Even using only nonviolent inmates has resulted in hundreds of assaults and batteries, along with weapons possessions, indecent exposures and other crimes among inmate firefighters in the last 10 years, according to data compiled by corrections officials and provided at the AP’s request. Officials said the rate is much lower than in higher-security prisons.

State Sen. Jim Nielsen, R-Gerber, a former parole commissioner, said it is “unconscionable” to add to the risk by using inmates with a history of violence.

“They’re weighing this minor good against a major bad of compromising justice and the safety of our citizens,” Nielsen said.

Harriet Salarno, founder of Crime Victims United of California, said she is also concerned but fears the state has no choice.

“This is very, very dangerous, but when you have a forest fire, what can you do?” she said Monday. “You need manpower to fight the fires, so we’re now putting dangerous criminals out there.”

Inmate firefighters are housed in 43 unfenced, minimum-security camps scattered across the state. They are guarded by a few correctional officers but while fighting fires are overseen only by unarmed CalFire captains who direct the inmates as they use hand tools to chew through brush and timberland to create firebreaks to stop advancing flames.

An average of nine inmates escape from the camps each year but since 2011 all but one has been recaptured.

The inmates often are used in rough, remote or environmentally sensitive terrain that is inaccessible to bulldozers. They accounted for nearly one of every five state, federal and local firefighters battling the recent Lake County and Sierra foothills fires.

The program makes inmates eligible for earlier parole, has higher pay and more relative freedom than other inmate jobs, and provides skills they can use once they are freed.

Officials are proposing loosening the rules because the number of available inmates has been shrinking since late 2011. That’s when, under court order to reduce overcrowding, California began keeping thousands of lower-level offenders in county jails, leaving a higher proportion of violent and serious criminals in state prisons.

Since then, other initiatives have further reduced the number of potential firefighters.