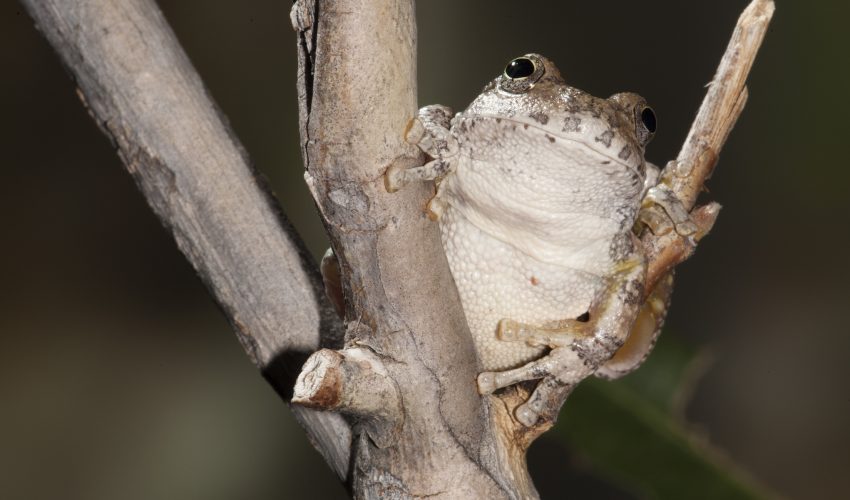 When I was in high school, my environmental science class took a small voluntary field trip after dark. At night we hiked up rough sand stone canyons dotted with scattered pools of water. We jumped over trickles and scrambled around boulders. Flashlights cut through the darkness everywhere. We made an enormous ruckus. The canyon tree frogs were singing back at us that night too. Unsurprisingly we heard but didn’t see a frog. Canyon Tree Frogs became something mysterious to me after that night; something wild and hidden.

Years later, again on the Colorado National Monument, I was hiking through desert canyon country. I was half catching insects for a college entomology class, half hiking for pleasure. Stopping near an ephemeral desert pool, I watched carefully for water insects. There were darting water beetles beneath the surface, water striders dancing on the top. In the bottom of the pool was also a cluster of small, gooey eggs: frog eggs. In my mind the eggs became Canyon Tree Frog Eggs. I briefly contemplated taking the eggs home and raising them in an aquarium to satisfy my curiosity. I changed my mind though, it would be illegal to take the eggs and I doubted my ability to raise them. The eggs remained a mystery.

This fall my girlfriend Erin and I drove out to Bear’s Ears National Monument. Bear’s Ears is a beautiful piece of desert. Burnt red stone out of a thousand westerns lines the horizon, yellowish stone canyons yawn at your feet. The place feels remote, alien, yet familiar; a dream landscape. We drove for an hour on dirt roads, rutted and punctuated with rock. We parked next to two other vehicles. In one vehicle, a family was getting ready to depart. The man told of finding pottery sherds that he left in the canyon and wondered if we knew of petroglyphs. We didn’t. The man and his wife sipped beer, their young daughter enthused on their trip. The family left; they were the last people we saw for three days.

The hike we chose in Bear’s Ears was Dark Canyon. Remote, wild, rugged, the canyon was both the good and the painful part of freedom. Scrambling down a steep canyon wall covered in scree, we walked broken fragments of crumbling trail. We lost the trail, only to find a small cairn leading us on, into the canyon. Cactus were everywhere, the few junipers were blessings of shade.

The bottom of the canyon was a maze of boulders and shrubs in a dry streambed. We were happy to have descended to the bottom. I still have two bruised toe nails from scrambling down the canyon. We were tired of the madness of carrying our Shih Tzu down class 3 terrain and let her down to sniff around boulders and walk. The trail from the bottom to our campsite wasn’t long.

We slept on the sand beneath a cottonwood tree. We could hear the constant mutterings of a stream by our heads. I thought sometimes I heard snippets of conversation but it was always the stream. Hiking just a little uphill from the stream we became enveloped in eerie silence. The canyon forked, calling us in too many directions for one trip. We pondered the idea of a month spent in this lonely spot.

The first morning, I stumbled towards the stream, empty coffee pot in hand, ready for the morning ritual. By the stream rested a small, greyish amphibian. Before I could stop, the frog leapt and neatly splashed into the stream. The frog swam to the bottom of the clear water and stopped; hiding. I watched for a few minutes and the frog didn’t move. Frogs are adapted to spend long periods of time underwater. Amphibians can even absorb small amounts of oxygen from water through porous skin. I filled my coffee pot and went back to camp.

I wandered down a canyon, quiet, bright, beautiful, a land of shade and sun, sand and rock. I found the tiny fossils of Crinoids or Sea Lilies embedded in stone. Sea Lilies still live in oceans today. I marveled at the beautiful opalescent quality of the fossils and the age and power of the earth. Parts of Utah were once ocean; they may again be ocean one day.

Back at camp there were more frogs near the stream, I got a better look at them. The frogs had long delicate toes ending in rounded cups. Their eyes were bright; a greyish color matching the skin. The frog’s skin was dotted with red specks. I had a growing realization, I looked in our field guide to confirm; these were Canyon Tree Frogs. The frogs swam in the stream, or sat on the banks. We only saw them in the late afternoon or early morning. Canyon Tree Frogs are nocturnal.

Recently Donald Trump ordered Bear’s Ears National Monument reduced in size by 85%. The move could open up thousands of acres to mining, to oil and gas, to ranching. The move is a blow to Native American groups, to environmentalists and everyone who loves the outdoors. The Canyon Tree Frog is not endangered. I won’t tell you that Canyon Tree Frogs may hold the cure for cancer or how many mosquitoes they eat. Canyon Tree Frogs are rather ordinary, easily missed, a small, rather cute frog. Canyon Tree Frogs are precious. Other people will tell you of Native American ruins, and fossils, or rare plants and animals. All of these things are important, they all deserve a fight.   Why should you care about one frog? Isn’t the beauty of one frog worth a fight? What we stand to lose is mundane as well as magnificent. We may lose some artifacts. We may lose fossils or an endangered bird. We’ll also lose a lot of mundane things. We’ll lose the quiet sound of a stream alone in the desert. We may lose the desert smell of one juniper or the sticky taste of a piñon nut. We can lose a hundred small, insignificant individual animals. We may lose the croaking, splashing, swimming of half a dozen frogs in a remote desert canyon.

If we give Trump even the life of one frog or a hundred, we’ve given too much. We stand to lose so much more. Others will remember Bears Ears in their own way and fight for it. I will remember the Canyon Tree Frogs. I will take my own stand.