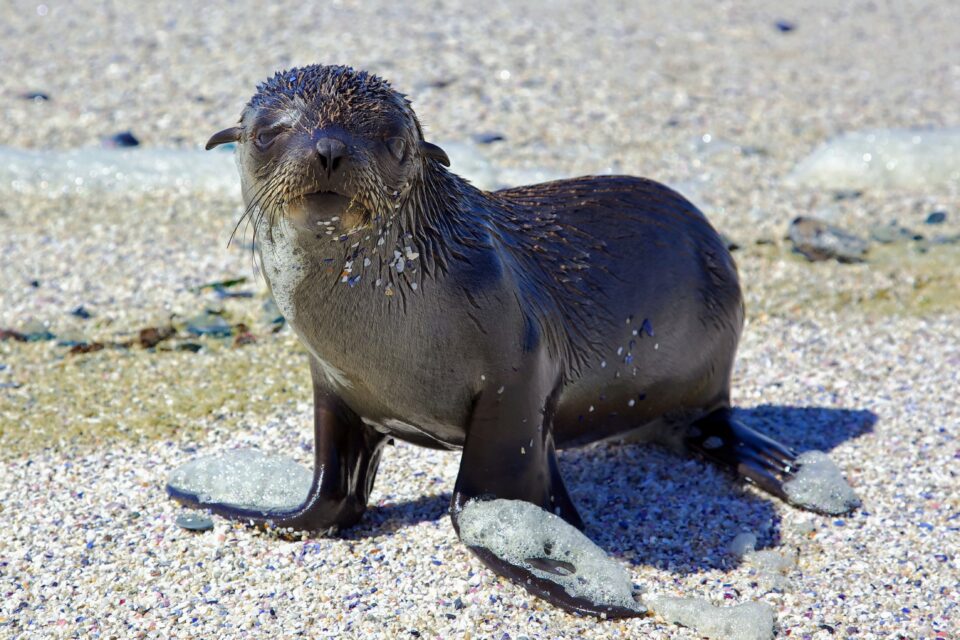 While investigating the impacts of pollution in Namibia, researchers have found that hundreds of Cape Fur seals become entangled in fishing lines and nets each year.

Dr. Tess Gridley is the co-director of the Namibia Dolphin Project and a senior lecturer in the Department of Botany and Zoology at Stellenbosch University. She explained how plastic pollution, particularly lost and discarded fishing nets, can have devastating consequences for marine life.

“Once entangled, these seals face a very painful and uncertain future: finding food becomes harder and wounds can become deep and debilitating, and likely cause death in many cases,” said Dr. Gridley.

“Changes to policy could help, such as financial incentives to recover lines, safe disposal of nets and sustainable alternatives to plastics.”

The study revealed that a high number of affected animals were pups and juveniles, which were mainly entangled around the neck by fishing line. The overall rate of entanglement was roughly 1 per 500 animals. This rate was similar between the two colonies of Walvis Bay and Cape Cross.

Between 2018 and March 2020, the disentanglement team was able to free 191 out of the 347 animals that were found to be entangled.

The researchers had limited resources for their work. By comparing low cost methods of data collection, they found that photographic scans of the colonies were a fast and accurate method for collecting data on entangled individuals.

Study lead author Stephanie Curtis said that the impact of plastic pollution in the ocean is devastating. “Seals should not have to suffer this way because of our carelessness with waste.”

According to Dr. Simon Elwen, fur seals are especially vulnerable to becoming entangled. “They are very curious and playful animals and will investigate objects in the water, but their thick, backwards facing fur which keeps them warm at sea easily snags lines and straps and stops it falling back off.”

Naudé Dreyer of Ocean Conservation Namibia explained that the project – which was launched in 2018 – is ongoing. “Since the start of 2021 we have already disentangled over 600 fur seals in only two colonies.”

“This is the tip of the iceberg. It is imperative that studies such as this highlight the consequences of plastic waste on marine animals, and bring around change for the better.”