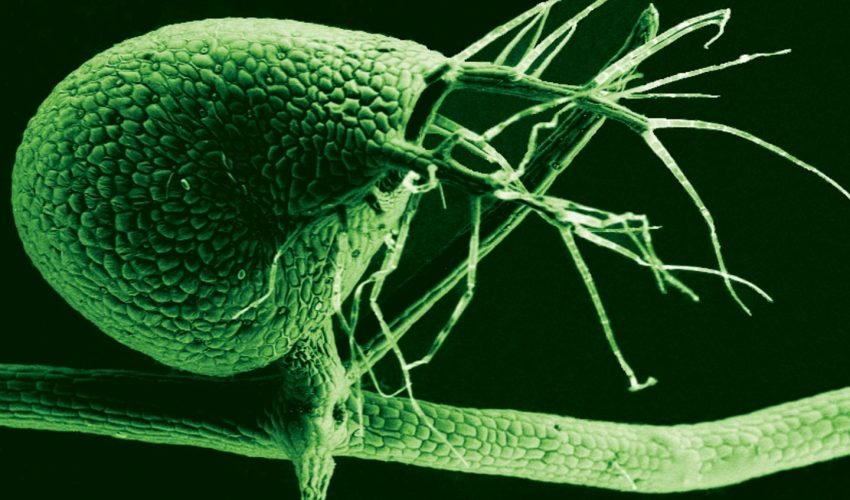 We often think of plants as immobile, generally unexciting flora that – despite their inaction – play a pivotal role in preserving our planet. But plants can be more than just static bundles of photosynthesizing cellulose. For example, the carnivorous humped bladderwort (does the name have you excited yet?) is actually a practiced predator. It lives in swamps and ponds, surviving by sucking prey into tiny traps in its walls at speeds of under a millisecond.

But the tiny organisms this plant preys on don’t just provide it with the sustenance and nutrients it needs to survive. A genomic analysis of the plant published in Proceedings of the National Academy of Sciences shows the added value of this carnivorous lifestyle for the plant’s evolutionary history.

A team of researchers, led by Stephan Schuster of Nanyang Technological University in Singapore and Victor Albert of the University at Buffalo College of Arts and Sciences, discovered how this plant repeatedly retained and enhanced the genetic material associated with its carnivorous nature – despite significant evolutionary pressure to delete this DNA.

These carnivorous genes were responsible for the trapping of prey, digestion of proteins, acidity of the traps, and transport of bits of protein from the prey between the plants’ cells. “What’s exciting is that we didn’t go in and cherry pick these genes,” says Albert. “We used bioinformatics to identify genes that were preserved and enriched in the species, and when we did that, these genes related to a carnivorous lifestyle were the ones that stood out. They were screaming out at us, telling us to look at them.”

The researchers found that the bladderwort had a tiny, gene-rich genome, which is indicative of a species that has a history of frequent gene deletion.

“The trap of Utricularia is only two cells thick, and the way it does its trapping is it creates a whole lot of negative pressure inside the trap to suck in the prey once triggered,” explains Luis Herrera-Estrella of the Center for Research and Advanced Studies in Mexico. For a system so tiny and precise, every part must be working properly – or the plant goes hungry.

Genome-sequencing is an important part of so many facets of research today. To be able to delve into an organism’s evolutionary history with this much detail is a privilege that scientists have only been able to experience recently, due to new advances in technology. Studies such as this pave the way for further genome-sequencing research as we continue to learn about the world around us.